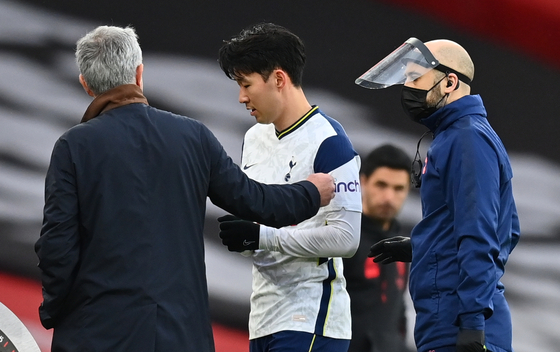 Tottenham Hotspur manager Jose Mourinho talks to Son Heung-min as the Korean striker leaves the pitch with an injury during a match against Arsenal in London on March 14. [EPA/YONHAP]

Speaking at a virtual press conference on Wednesday ahead of Spurs' Europa League Round of 16 clash with Croatian side Dinamo Zagreb on Thursday, Mourinho said he didn't know how long Son would be out for, adding that the club didn't want to take any chances with his latest injury.

"If a player is injured and cannot play, a friendly or official, it doesn't matter the match it is," Mourinho said.

Son appeared to suffer a hamstring injury during Spurs' North London derby against Arsenal on Sunday, pulling up while on the run in the 18th minute holding his leg. Tottenham quickly sent their medical team onto the pitch and after a brief attempt to walk it off, Son was taken off and headed straight down the tunnel.

Speaking after that game, Mourinho had said the injury was muscular and he didn't know how long the recovery would take, but added that "it wasn't as bad as first feared."

Reports on Tuesday suggested that Son is making a quick recovery and could be back in the squad for the team's game against Newcastle United on April 4, or possibly even for the game against Aston Villa on March 21.

If Son is back in the squad for the Aston Villa game, which falls before Korea's match against Japan, then Spurs will likely release him for the international fixture. If Son doesn't return until the Newcastle match then he will likely miss the Korea game as well.

"If we arrived next week and Sonny is injured and we can prove that to the South Korean Football Association, what's he going to do there? Nothing," Mourinho said.

Even if Son is fit, it is not yet clear whether Spurs are able to release Son for the game or whether quarantine rules could still prevent him playing.

Under revised FIFA rules due to the coronavirus pandemic, clubs are not required to release players for international fixtures if players will be required to quarantine for at least five days upon their return. That temporary rule means that even if fit, Spurs could refuse to release Son depending on British quarantine regulations.