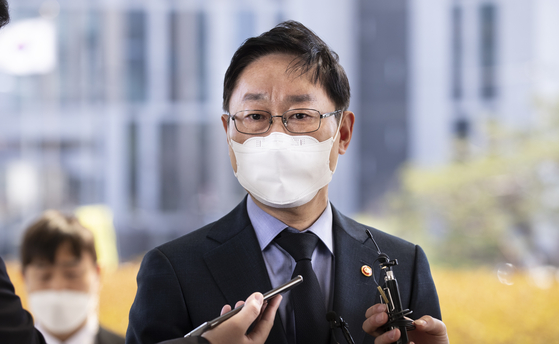 
The Justice Ministry and the Supreme Prosecutors' Office will launch a joint inspection into prosecutorial practices in the alleged perjury case involving a witness who testified against Han Myeong-sook, a former prime minister convicted of accepting political slush funds, the justice minister announced Monday.

“We will clarify the truth regarding human rights violations during the investigation, the circumstances surrounding the use of a prison inmate as an informant, and the damage to procedural justice from press leaks which occurred between the submission of the inmate's court petition [admitting perjury] and the prosecutors’ decision to not serve an indictment,” Justice Minister Park Beom-kye said in an afternoon statement released through Lee Jeong-soo, director of the Justice Ministry’s criminal affairs bureau.

The justice minister’s statement comes after senior prosecutors reported Sunday to the Justice Ministry that they would not seek new indictments in the case after a marathon, 12-hour-long meeting which concluded Saturday morning.

On Wednesday, the Justice Minister invoked his authority to order the Supreme Prosecutors’ Office to re-examine allegations that prosecutors in 2011 pressured a fellow inmate of Han Man-ho, an imprisoned construction businessman, to commit perjury by testifying that they heard the businessman saying he gave the former prime minister 900 million won ($800,000) in political slush funds.

The businessman first admitted to, and then later denied, giving Han money. The Supreme Court in August 2015 unanimously declared the former prime minister guilty, and the court accepted a 100-million-won check from the businessman, used by her younger sister in securing a jeonse, or long-term lease, as evidence of Han’s guilt.

The former prime minister was sentenced to two years’ imprisonment, rendering her ineligible for public office for 10 years.

However, in May 2020, the businessman’s fellow inmate submitted a court petition claiming that he was coached by prosecutors to claim he had heard the businessman saying he gave money to the former prime minister.

With the statute of limitations on the alleged witness perjury running out on midnight Monday, the justice minister’s announcement continues the political, rather than legal, front in the ruling party’s protracted struggle with the state prosecution service.

In his Monday statement, Park expressed displeasure with various aspects of the senior prosecutors’ deliberation and the resulting decision to not indict the witness accused of committing perjury.

He took particular issue with the presence of the prosecutor accused of coaching the witness at the meeting.

“That meeting was supposed to be about the inmate committing perjury, not about disciplining the prosecutor who first interrogated the inmates,” Park said.

“If it is true that prosecutors reached their decision [to not indict the inmate] by relying on mere reports and not the vast array of primary material on the case –– or if they ignored the inmate’s confession out of prejudice against prisoners –– they will never be free of the controversy that they decided to protect one of their own.”