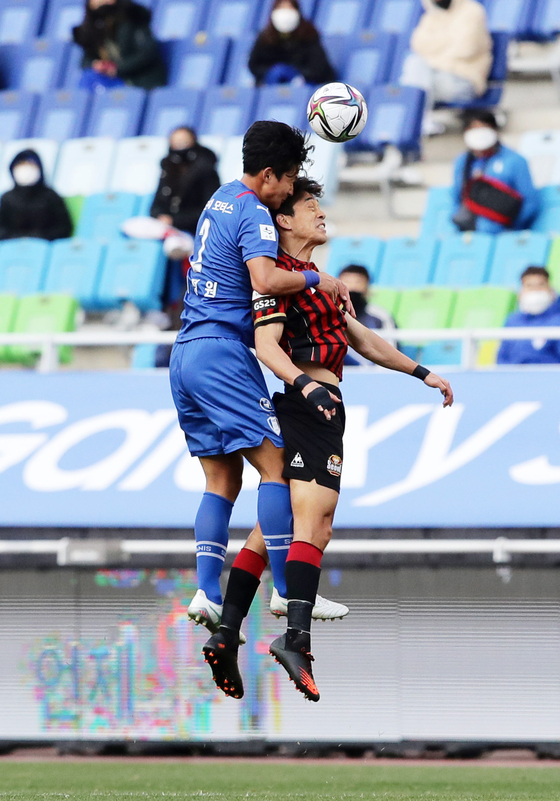 
FC Seoul were the only one of the top four teams in the K League 1 to walk away with a win over the weekend, beating the Suwon Samsung Bluewings 2-1 on Sunday at Suwon World Cup Stadium in Suwon, Gyeonggi.

The Bluewings opened the scoring, with Jung Sang-bin finding the back of the net in the 16th minute to put the home side ahead. Seoul captain Ki Sung-yueng responded with a goal in injury time at the end of the first half to tie the score, with Park Jung-bin putting the visitors ahead in the 80th minute.

Seoul now sit in second in the K League 1 table with four wins and two losses, behind Jeonbuk Hyundai Motors, the only team in the league that is yet to lose a game.

Jeonbuk are looking strong at the top of the table with four wins and two draws, but struggled to a draw against Suwon FC on Saturday.

Jeonbuk's only goal came from a penalty in the 54th minute after a foul from Suwon's Park Ji-soo. Suwon, the last-place team in the K League, were unable to respond for more than 30 minutes, with Kim Geon-ung finally finding the back of the net in the 90th minute to tie the game at the very last minute.

Ulsan Hyundai FC sit at No. 3 in the league, but also failed to pick up a win over the weekend, losing 2-1 to Daegu after a last-minute goal in injury time at the end of the second half.

The Bluewings round off the top four, having lost to Seoul on Sunday.

Fifth-place Seongnam FC beat the seventh-place Pohang Steelers 2-1, the only other team in the top half of the table to pick up a win over the weekend.

Seongnam fell behind just six minutes into the game after Song Min-kyu scored for Pohang, but got the equalizer in the 36th minute.

Pohang went down to 10 men after Song was sent off in the 42nd minute, but it still took Seongnam until the 89th minute to pull ahead with a goal from Lee Jung-min.

Jeju United round off the top half of the table in sixth place. The recently-promoted club also failed to pick up a win, drawing 1-1 with 11th-place Gwangju United.

Eighth-ranked Incheon United lost to No. 10 Gangwon FC to round off the weekend's matches.

Gangwon opened the scoring in the 20th minute, but then had to play the entire second half without only 10 players after Kim Dong-hyun was sent off in the 45th minute. Gangwon still managed to hold on to the small 1-0 lead, before cementing their victory with a Ko Moo-yeol penalty to take the score to 2-0 in the 87th minute.

The K League will not take a one-week international break as the Korean national team take on Japan in the first international friendly of the year on Thursday night. With international league players unable to join the Taeguk Warriors due to coronavirus quarantine regulations, the team will be made up almost entirely of K League players.

The league will return for its seventh round of games on April 2, when the Steelers take on Daegu at home.