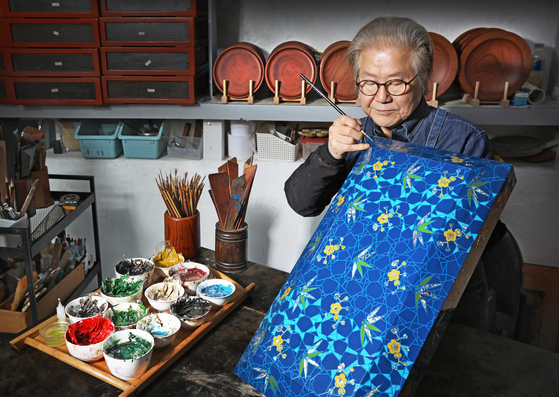 Chaehwa chilgi is traditional Korean colored lacquerware that features various patterns drawn on with a fine-tip brush. It is coated with natural pigments mixed with lacquer — refined sap of the Chinese lacquer tree that gives a glossy finish — dubbed “mystical paint” due to its durability.

Choi and his entire family are all in the colored lacquerware business. His wife Kim Kyoung-ja is also a cultural transmitter of Korean colored lacquerware. She uses obangsaek — Korea’s traditional color spectrum of red, blue, yellow, white and black — with lacquer to make everyday craft items. His son Choi Min-woo fuses the traditional craft with modern plastic art, and also tries to reimagine the technique through paintings. His daughter Choi Da-young combines the traditional manufacturing method with modern design, dreaming of the globalization of lacquerware. 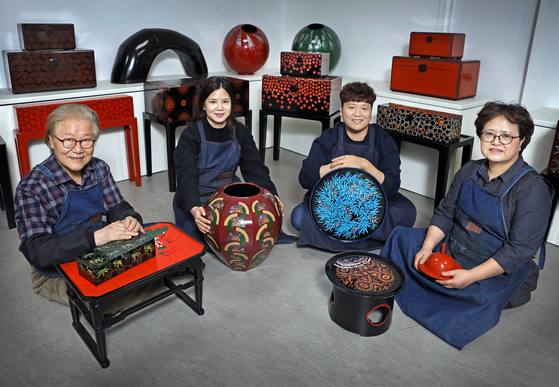 
Born in 1951 in Gochang, North Jeolla, Choi showed a talent for drawing and crafts from a young age. He started learning how to make najeon chilgi, or lacquerware inlaid with mother-of-pearl, from a distant relative when he was 19 years old. When Choi showed outstanding talent, the relative arranged for him to train under a greater teacher: the late Kim.

Choi received five years of intensive training under Kim. Korea had a nightly curfew during that time, but he would work at the studio until midnight. He was barely paid and focused solely on learning the craft. At the time, lacquerware craftsmen specialized in either inlaying the mother-of-pearl or varnishing with lacquer, not both techniques. Choi learned how to do both, then also spent a lot of his time making colors and painting on lacquerware.

Most people at the time made lacquerware for commercial profit, but Choi was more interested in creating works of art. The deeper he delved into art, the more he realized that he was lacking in the design element of the craft, so he focused his studies on that aspect. 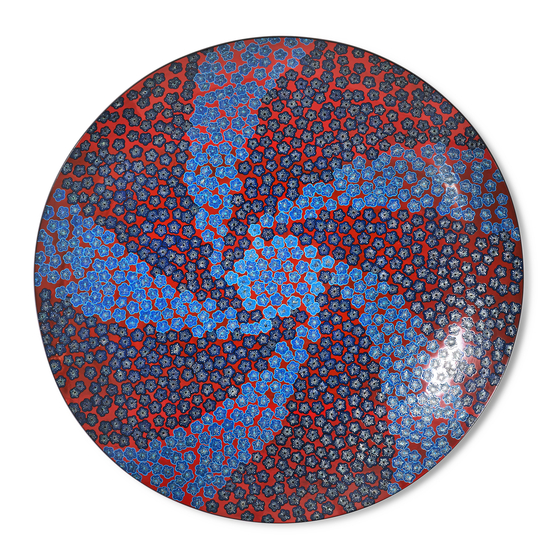 A large plum blossom-patterned tray. The plum blossom was the royal symbol of the Joseon Dynasty (1392-1910). [PARK SANG-MOON] 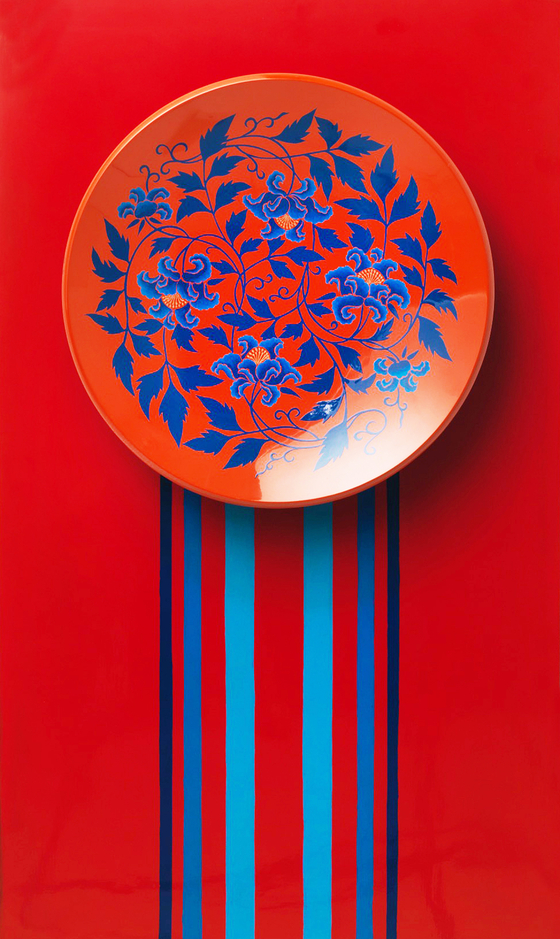 The most difficult part of making colored lacquerware is waiting for the color to develop.

Initially the lacquer is pitch black so when mixed with the powdered pigments, it is impossible to determine the vibrancy of the end color. It takes three months to three years of repeating the delicate process of varnishing and drying until the color fully blooms. Ample experience is necessary for the artisan to formulate the pigments while predicting what the final result will be. 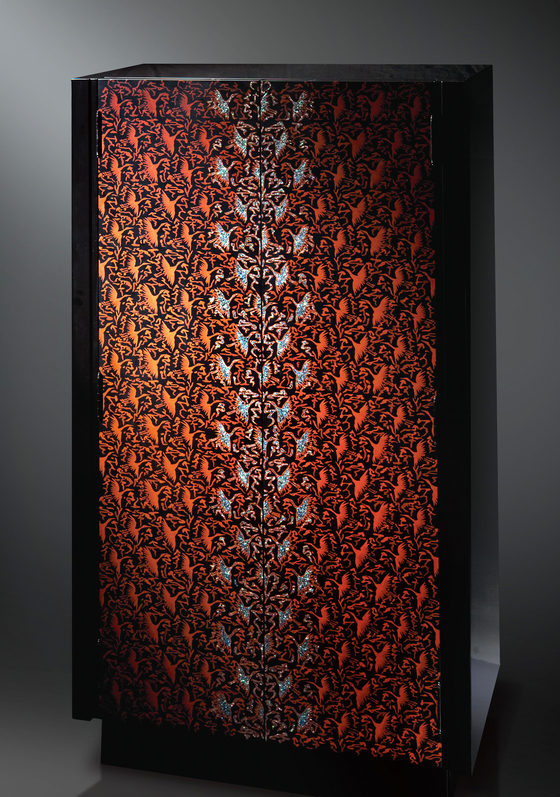 Choi's wife Kim majored in Western painting, but Choi was against her joining his work at the beginning of their marriage. But when he was flooded with orders, he eventually had to ask her for a helping hand. After Choi fell ill, Kim was left alone to make lacquerware day and night so she could to pay her husband's hospital bills as well as financially support their children. Kim’s lacquerware-making skills improved quickly while Choi battled his illness. A crisis for Choi was ironically a new opportunity for Kim. 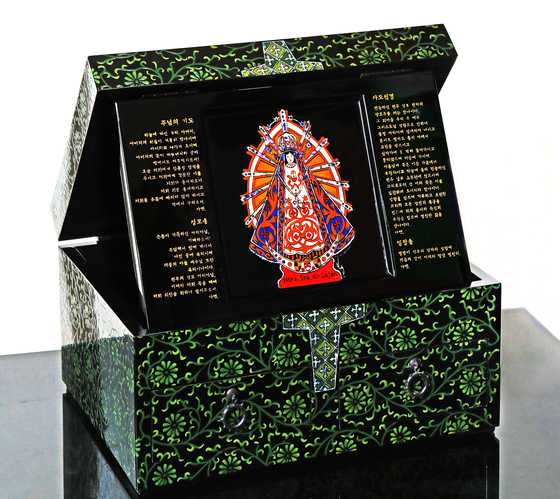 A colored lacquer prayer box Choi and Kim made for Pope Francis when he visited Korea in 2014. The couple used the traditional method to make the box and painted on a chrysanthemum and arabesque pattern over the span of six months. [PARK SANG-MOON]


Choi's children first became involved in the craft after Choi went on a tour of Japan's family businesses, which are known to pass down a trade or craft for generations. Such culture shocked Choi and made him determined to pass down his craft as well, which led him to sign his then-four-year-old son up for classes at an art tutoring center. When his son enrolled in middle school, he became Choi’s apprentice, officially beginning the succession of the family business.

Choi's son Min-woo majored in lacquer art, earning a bachelor's and a master's degree at Pai Chai University. He is constantly researching ways to modernize the manufacturing process for colored laquerware. Choi's daughter Da-young studied at the Korea National University of Cultural Heritage and has undertaken a wide range of artistic activities, combining modern design with the traditional manufacturing process that her parents taught her. She and her mother are set to hold a "Colored Lacquerware Mother and Daughter Exhibition” (translated) this April.

The Choi family’s studio is located in Donggyo-dong, Mapo District, western Seoul. The studio is full of colorfully patterned works. Many domestic and foreign tourists visit to see the unique craft of Korean colored lacquerware. One Chinese visitor even kneeled on the ground to carefully examine the work, showing deep respect for the traditional Korean art. 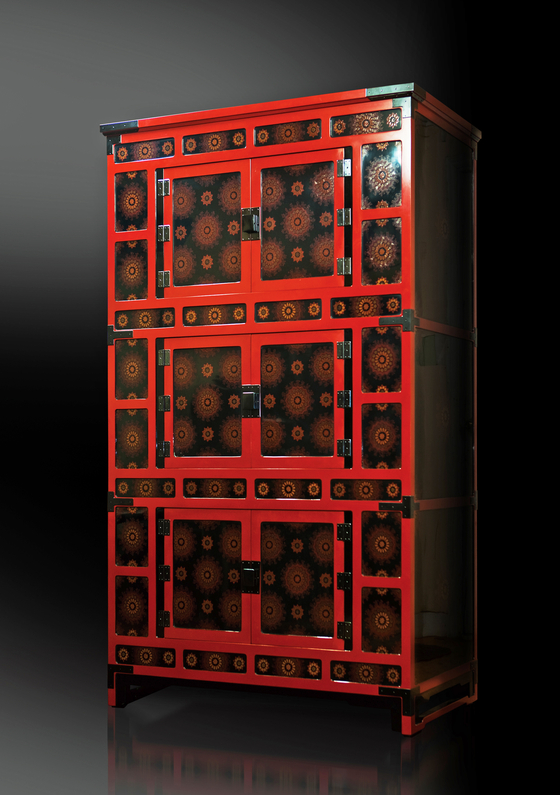 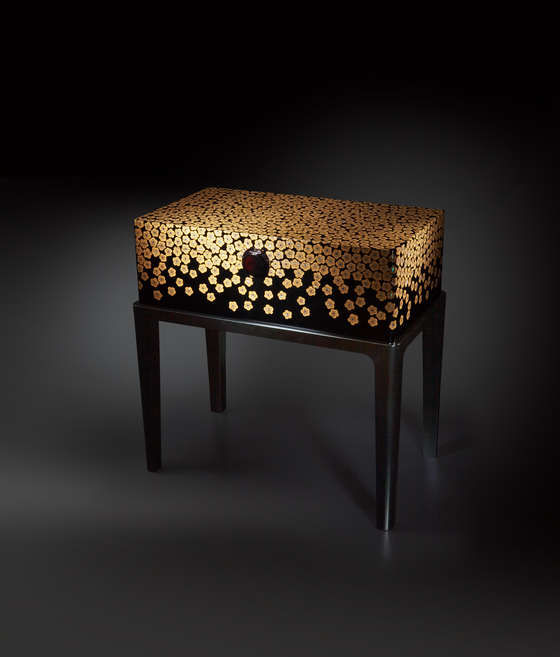 
Colored lacquerware was at its height during the Three Kingdoms era (57 B.C. to A.D. 668). But it fell out of favor in the Goryeo Dynasty (918-1392) when lavish mother-of-pearl lacquerware became popular, and the craft was not passed down properly. After the Japanese colonial rule (1910-1945) which oppressed Korean tradition and later the influx of cheap synthetic materials, colored lacquerware seemed to have no place to stand.

Nonetheless, Choi and his family strive to carry on the Korean spirit and legacy of the tradition, hoping that colored lacquerware will one day receive the recognition it deserves as a Korean cultural heritage. Until that day, the family will continue to devote their passion to colored lacquerware.