Yang Hyeon-jong to start in spring training game vs. Reds

Yang Hyeon-jong to start in spring training game vs. Reds 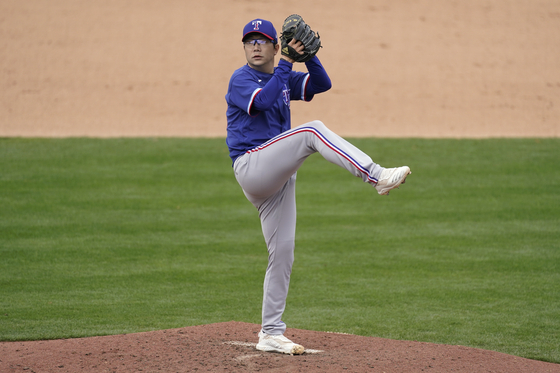 Texas Rangers pitcher Yang Hyeon-jong throws during the fifth inning of a spring training baseball game against the Milwaukee Brewers on March 13. [AP/YONHAP]


It looks like Yang Hyeon-jong will get the chance to prove his ability as a starter before spring training is through, with the Texas Rangers pitcher tipped to start on the mound on Wednesday against the Cincinnati Reds.

According to The Athletic reporter Levi Weaver, among others, Yang will start against the Cincinnati Reds at Goodyear Ballpark in Goodyear, Arizona on Wednesday. That decision hasn't been reflected on the Rangers "possible pitchers" listing as of press time, but has been reported on by a number of other reporters in the club's press pool.

Getting a chance to start, even in a spring training game, seemed a long way off for Yang just a couple of months ago, when he joined the Rangers organization on minor league contract. He was invited to spring training with a chance to compete for a spot in the big leagues, and seems to have pulled that off.

Yang has appeared in three games for the Rangers during spring training as a bullpen pitcher with a 3.00 ERA, giving up just six hits and two runs in six innings pitched. That performance is likely enough to secure the 33-year-old's spot in the Rangers bullpen, skipping the minors altogether. Rangers manager Chris Woodward has suggested Yang is likely to be a multi-inning reliever, but there's always a chance he could earn a chance to start in the future.

While the chance to enter the starting rotation is still a long way off, Yang's outing on Wednesday will be a chance to once again prove what he can do, and possibly earn that all-important spot in the bullpen for opening day next week. MLB.com's Kennedi Landry has already made it clear she things Yang will have a chance to pitch on opening day.