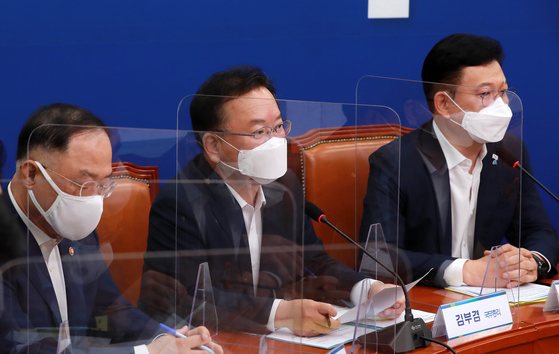 The ruling party and government are still discussing which small businesses should get relief grants from the latest supplementary budget.

But calls for giving grants to all households were muted Monday.

According to the Democratic Party (DP) on Monday, its leadership told Prime Minister Kim Boo-kyum in a meeting that help to small businesses should be expanded.

“There’s a need to consider expanding the subsidies for small businesses more aggressively due to the changing quarantine situation,” said Kim in opening remarks before the meeting at the National Assembly on Monday. “[The government] will come up with more robust support measures that raises the amount given to small shopowners.”

“Additional compensation is necessary as the quarantine situation has worsened since the [budget] proposal was made,” Song said. “We estimate that only 0.3 percent of small businesses will be able to receive the maximum amount of 9 million won ($7,800) while 72 percent will get less than 3 million won.”

The DP and government are in final negotiations over the proposed supplementary budget, the sixth since Covid-19 began in 2020, which will be put to a vote by the National Assembly by the end of this week.

According to the DP, 30 million won will be the biggest single amount of support given to small businesses.

The goal is to start giving the aid to businesses Aug. 17.

Raising the ceiling is estimated to increase the budget from 3.3 trillion won to 5.8 trillion won.

The government included 600-billion-won for that compensation in its supplementary budget proposal. The committee last week decided to increase that amount to 1.2 trillion won.

Earlier this month, the government proposed a 33 trillion won supplementary budget of which nearly half, or 15.7 trillion won, would be used to help small businesses affected by Covid-19 social distancing measures. It includes 10.4 trillion won in emergency relief grants for households, except for those in the top 20 percent income brackets.

While the emergency relief grants were not discusses in Monday’s meeting, the DP continues to push for grants to be given to all households regardless of income. Finance Minister Hong Nam-ki strongly opposes that idea.

The DP is proposing scrapping the cash-back program in exchange for emergency relief grants for all households.

The DP also opposes the government using 2 trillion won of the extra budget to pay down debt.


Appearing in front of lawmakers on the Strategy and Finance Committee last week, Finance Minister Hong said the government will do all it can to swiftly execute the supplementary budget if lawmakers approved it.

But he stressed that it is not the role of the government to follow decisions made by the ruling party -- hinting at opposition to universal emergency relief grants.

He said managing the government's coffer shouldn't be affected by political decisions.