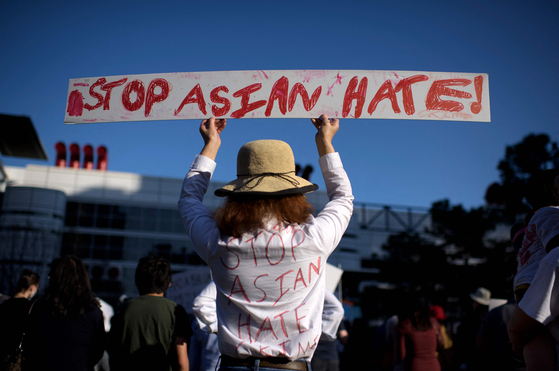 
Following the fatal shooting of eight people, including six Asian women, in Atlanta last week, many Asian celebrities both in Korea and overseas are making their voices heard and calling for an end to race-based violence.

“While prosecutors and law enforcement still debate whether to designate the murders as hate crimes, millions of Asian Americans and Pacific Islanders (AAPI), including myself, are left feeling abandoned and overwhelmed with memories of our past, the realities of our present and fears for our collective future in a country we love,” he wrote.

Nam, who grew up in Atlanta, also expressed his regret about how U.S. authorities handle such race-based violence, as well as delved into the less-spoken about issue Asian American's face in U.S. society which is trying to fit in and be recognized as an ordinary American as opposed to “perpetual foreigners” and “subjects of the model minority myth."

Korean-American actor Sandra Oh speaks during a rally calling for a stop to Asian hate in Pittsburg on Saturday. [SCREEN CAPTURE]

Other Asian celebrities have been sharing their thoughts on the issues online.

“I certainly don’t have all the answers, but I would like to use my platform and emphasize this is an issue that needs to be addressed now and that ignoring it won’t help us. I know this one post won’t solve the problem, but I hope to help raise awareness on hate crimes against all,” the singer wrote. 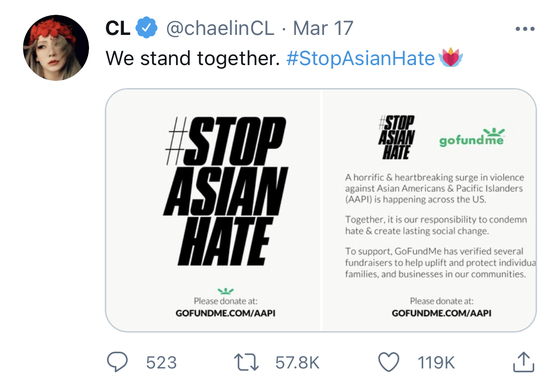 
Singer CL, who’s recently been active collaborating with artists in the U.S., also took to her social media account to post a message of encouragement and show support for the victims of Asian hate crimes, using the hashtag 'stopasianhate.' She also shared an article from American entertainment magazine Billboard about how artists working mainly in the U.S. have joined hands to condemn anti-Asian violence.

Another Korean-American celebrity, actor Sandra Oh, gave a passionate speech at an anti-Asian hate rally saying that many in the Asian community are “very scared.”

As celebrities do their best to raise awareness, attention is being turned to K-pop stars with global fandoms, to see who will speak up against violence against Asian Americans.

In the past it was openly recognized that K-pop musicians were manufactured entertainment figures but in recent years, stars have been taking on larger roles in their careers, such as writing and producing their own music.

The humanitarian efforts of boy band BTS and its global fan club ARMY, are probably best known, as well as the band's work with the United Nations.

“The ripple effect from messages celebrities share carry powerful influence over people. What entertainer Yoo Jae-seok says about psychology is likely to get much more attention than what I say about psychology,” said Kwak Keum-ju of Seoul National University’s department of psychology.

“They [celebrities] can be the ones rising above political discussions and inspire the public to simply think about social issues and campaigns in order to respond resiliently to any issues we will come to face in the future.”

Such activism can also strengthen the connections between fans.

“I’m not sure if K-pop artists expressing their opinions on certain social issues can bring them a wider fan base, but I’m sure that their comments will make their current fans come together even more and remind them of why they support the celebrities they cheer for,” said music critic Kim Zakka.

K-pop musicians also face more hurdles than their foreign counterparts when it comes to expressing their feelings on social issues through their music. 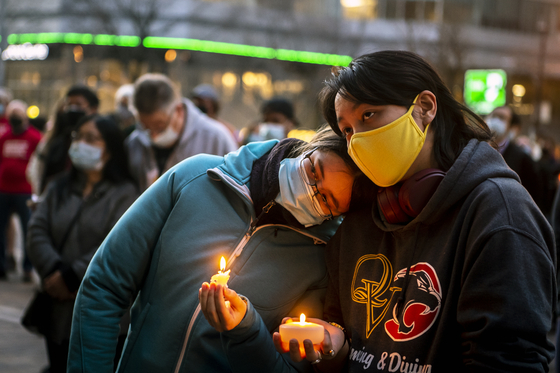 Residents in Pittsburgh console each other during a candlelight vigil on Sunday. [AP/YONHAP]


“Those overseas artists that are known to express their resistance to the existing prejudice or issues with their songs usually have a control over their creation, while many K-pop songs are co-produced among different companies and agencies,” said Kim, explaining why it is difficult for K-pop singers to take a stance through their music.

“A unique characteristic K-pop is that it keeps its distance from political issues and the genre has been recognized as something safe and harmless, but this might have worked as a restriction for the genre to grow further,” he added. “If artists develop ways to voice their thoughts through music, maybe that’s how K-pop grows more to reach out to a larger audience and find a sturdier position in the global music scene.”

The reaction to the Stop Asian Hate movement has been lukewarm in Korea, with some even going as far to say that the issue of discrimination against Asians in the United States does not affect Koreans.

Experts say that attitude is based on ignorance. Koreans born and raised in such a homogenous country like Korea have rarely experienced any racial discrimination based on their race.

“What people feels comes from the experiences they have had,” said Professor Kwak Keum-ju of Seoul National University, adding that short trips overseas and fragmented experiences of racial discrimination do not make people think they are victims of the same violence Asian Americans are speaking out about. She added that even Korean students who studied overseas have different ideas on racial discrimination, which depend on when they lived overseas and for how long.

“Since I was raised in Korea, I didn’t see much of such racism, so I somewhat understand why Koreans in Korea may not feel that racial discrimination against Asians is a social and global problem, but now I understand that people in Asia should pay more attention to the issue,” Chae said.

Culture critic Hwang Jin-mi also agrees that discrimination against Asian American has always existed but never risen to the surface like it has now.

“It is like the absence of global-level understanding in a way,” said Hwang. “Koreans have always been the first citizens in their own countries, and they just naturally think that they will be treated the same in foreign countries, especially Korean men who have never been a minority.”

She added that Koreans with that mentality discriminate other foreign nationals in Korea, and because of that, it is difficult for them to put themselves in the position of victims, until they learn to look at the problems on a global level.

“We need to have the ability to see who’s the relative majority and minority in every social situation, and unless we don’t realize that, people here will continue to think that racial discrimination is only an issue in other countries with other citizens.”

Professor Kwak also points out that Koreans fail to look back on their historical wrongdoings and instead focus on how well the country has developed economically.

“But now is the time to focus more on social movements and problems that are created in the process of making any development, and be ready to look for ways to find the answers to problems,” said Kwak.

Culture critic Hwang also agrees that now is the time to make a shift.