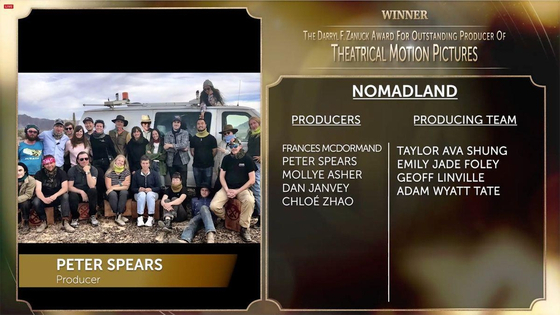 “Nomadland” centers around a woman who starts living a nomadic life in a van after losing her job. After taking home the Golden Lion at the Venice Film Festival last year, the film has been awarded some 200 prizes from film festivals and associations worldwide.

And the likelihood of “Nomadland” added an Oscar to its list of accolades appears to be growing after it won both a Golden Globe and a Critics’ Choice Award earlier this month.

The PGAs are considered a reliable barometer to predict the Oscars. Since the awards ceremony was founded in 1990, 21 outstanding producer recipients went on to receive the best picture for Oscars.

Best picture nominees for the upcoming Oscars on April 25 include “Minari,” “Nomadland,” “The Father,” “Judas and the Black Messiah,” “Mank,” “Promising Young Woman,” “Sound of Metal” and “The Trial of the Chicago 7.”