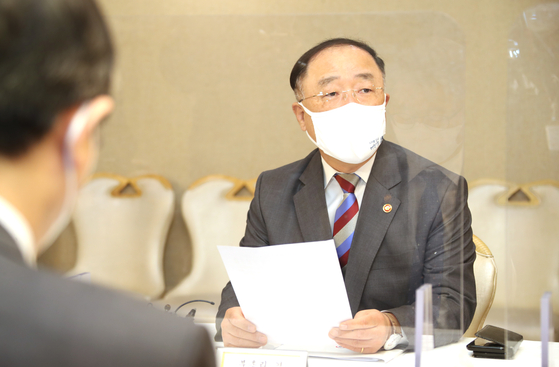 Finance Minister Hong Nam-ki emphasizes an optimistic forecast by the IMF ahead of a government real estate meeting at the government's complex in Seoul on Friday. [YONHAP]

This was 0.5 percentage points higher than a projection made in January and the most optimistic forecast yet by institutions at home or abroad.

The IMF said Thursday its executive board raised its forecast on account of the Korean government’s spending plans, as well as the “gradual normalization of Covid-related factors and stronger external demand.”

“They [the IMF executive directors] welcomed the authorities’ recent announcement of a proposed supplementary budget, which would enable a positive fiscal impulse for the current year by raising transfers targeted to affected workers and firms,” the IMF said in a statement.

The Korean National Assembly on Thursday approved on a 14.9 trillion won ($13 billion) supplementary budget whose main goal is to help small businesses and people with insecure jobs affected by the social distancing regulations that have been in place since late November.

It was the fifth supplementary budget since the Covid-19 outbreak began in 2020.

It advised the country to continue its expansionary fiscal policy.

The forecast by the IMF is the most optimistic so far.

The sunniest forecast before the IMF's was from the Organization for Economic Cooperation and Development (OECD), which predicted growth of 3.3 percent this year. The Bank of Korea (BOK) projected 3 percent, while the state-owned Korea Development Institute (KDI) projects 3.1 percent growth.

The government is targeting 3.2 percent growth for this year.

Earlier projections could go up as they did not take into account the most recent supplementary budget.

“The 3.6 percent outlook by the IMF not only exceeds our own government forecast of 3.2 percent but also the OECD’s 3.3 percent, which was the highest growth projection among international institution,” said Finance Minister Hong Nam-ki on Friday. “It is also aligned with three international credit agencies, including S&P, whose growth forecast for Korea averages 3.5 percent, and those of seven global investment banks including Goldman Sachs, which was raised from an average of 3.4 percent to 3.9 percent.”

“The government plans to quickly execute the fourth round of emergency relief grants,” Hong said.