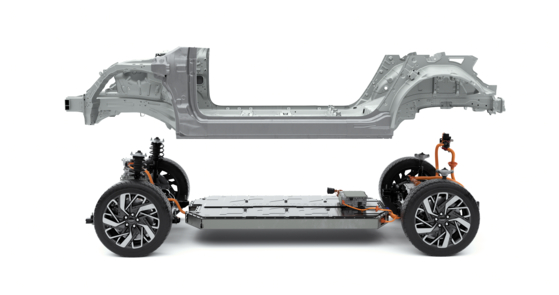 
Hyundai Motor Group unveiled its brand new one-size-fits-all module for battery electric vehicles (BEVs) on Wednesday, the latest step in its all-out effort to catch up with industry rivals such as Tesla.

Called the Electric Global Modular Platform, or E-GMP, the new modular system is expected to improve both the efficiency of the manufacturing process and the convenience for customers.

The adoption of a standardized E-GMP will help Hyundai Motor, Kia Motors and Genesis design new BEV models far faster than if every car had to be made on an adjusted platform originally designed for internal combustion engine vehicles, allowing the automaker to quickly respond to a rapidly changing market. The single platform, according to the Korean carmaker, will fit in sedans, crossover utility vehicles, sport utility vehicles and high-performance cars.

In terms of performance, BEVs running on the E-GMP will be able to drive 500 kilometers (310 miles) on a single charge. Although falling a bit short of Tesla’s long-range Model S, which is able to drive 647 kilometers, its range is beyond most of the BEVs available on road at the moment, which tend toward a 400 kilometer range.

The Korean automaker has significantly upgraded its charging system. Instead of a 400 volt system, the new models built on the E-GMP will have an 800 volt charging system to enable faster charging.

With the rapid charger, 80 percent of the battery can be charged within just 18 minutes. That means the driver will be able to drive 100 kilometers after just five minutes of charging.

Hyundai Motor admitted that there isn't sufficient charging infrastructure for the 800 volt system in Korea at the moment. In partnership with Korea Expressway Corporation, the automaker said it would build 12 charging bases, each installed with six 350 kilowatts chargers on highways and eight bases in the metropolitan area.

Existing chargers with 50 to 150 kilowatts of power will also be able to charge E-GMP vehicles, although significantly slower than 350 kilowatt ones.

The E-GMP will also enable what’s called vehicle-to-load (V2L) technology, which enables electricity in the vehicles battery to be used for external products such as air conditioners or TVs without requiring additional adapters or inverters. This feature is expected to benefit users that are going out camping or even charging other electric vehicles running out of power.

Albert Biermann, president and head of Hyundai Motor Group’s R&D division, emphasized that the E-GMP innovations will be brought to customers under Hyundai Motor’s well-known value-for-money strategy, although he did not specify the exact price range of vehicles built using the module.

The first car to launch using the E-GMP module will be the Ioniq 5, the first model to launch under Hyundai Motor's EV-dedicated brand Ioniq, expected in the first half of next year.

"For the Ioniq 5, you will see new features you haven't seen in other EVs," Biermann said. "We can definitely separate and differentiate from competitors. Value for money will always be the quality."