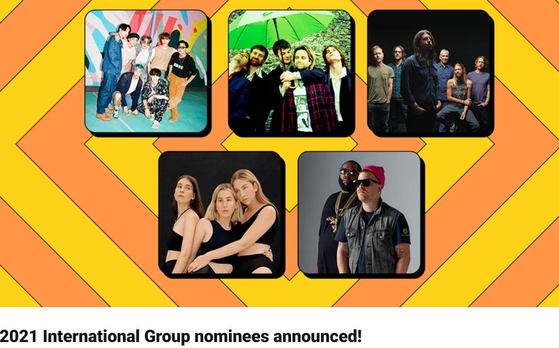 The nominees of the 2021 Brit Awards, in which BTS has been nominated for the first time. [SCREEN CAPTURE]


BTS was nominated for this year’s Brit Awards, the British Phonographic Industry’s annual popular music contest, for the first time.

According to the BBC, the Brit Awards suffered a backlash from ARMY, the name of BTS’s global fan base, when they dropped the category last year. Fans accused the Brit Awards of deliberately trying to keep BTS from winning.

The category was reinstated this year.

While the chances of the Korean band winning the award are high after being named the best-selling act in the world in 2020 by the International Federation of the Phonographic Industry — the first non-western act to be so — the BBC commented on  “stiff competition” from HAIM and Fontaines D.C., which are favorites among critics.

The ceremony is scheduled to take place at the O2 Arena in London on May 11. Usually it is held in February, but was delayed due to Covid-19.