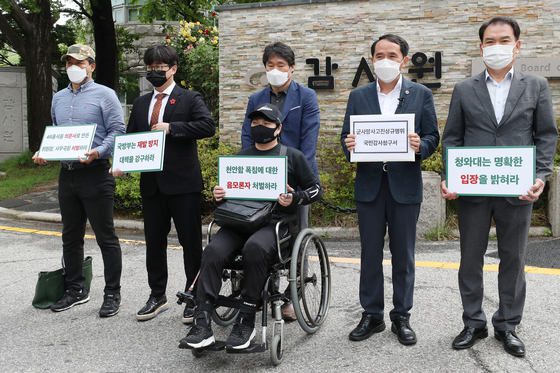 Surviving crewmembers and families of those killed in the Cheonan sinking protest in front of the Board of Audit and Inspection in Jongno District, central Seoul, on May 25. They demanded the board conduct a probe into the Presidential Truth Commission on Deaths in the Military for its now-revoked decision to open a reinvestigation into the sinking. [NEWS1]


Captain Choi Won-il of the Navy corvette Cheonan handed a document to the JoongAng Ilbo Tuesday which shows the military took no measures in response to warnings of North Korean preparations for an attack at sea.

The corvette sank in the Yellow Sea near South Korea-controlled Baengnyeong Island in March 2010 following an explosion.

According to the document, written five months after the incident to summarize comments made at a national security inspection conference, military authorities reported signs that the North was planning an "underwater infiltration” before the sinking to the Defense Ministry and the Joint Chiefs of Staff, but that neither delivered this information to the relevant units.

The conference was formed by the order of then-President Lee Myung-bak in May 2010 to review the state of national security and defense following the sinking of the Cheonan.

The document was produced by the conference following a visit by former Defense Security Commander Kim Jong-tae to the Navy’s 2nd fleet on Aug. 12, 2010.

According to a military source who spoke on the condition of anonymity, the “underwater infiltration” mentioned as a sign of an attack being prepared was “North Korean military activity in the area detected by the allied forces of the United States and South Korea.”

In his comments during the conference, which were recorded in the document, Kim said, “Action was requested several times to the Joint Chiefs of Staff [in response to the signs] but no special measures were carried out.”

Although Kim is known to have previously commented on the military’s lackadaisical attitude toward warnings of a North Korean attack, the document marks the first time that his remarks were backed by military papers.

Concerning the document, Choi said, “The navy command ordered the document to be destroyed immediately after the conference, so it hasn’t been seen until now.”

Choi added that he had kept the document, and gave it to the JoongAng Ilbo because certain individuals, such as Shin Sang-cheol, a former member of the South Korean-led multinational Joint Civilian-Military Investigation Group (JIG) which looked into the sinking, and former Democratic Party junior spokesman Cho Sang-ho continue “fanning the flames of conspiracy theories regarding the Cheonan sinking.”

“People should know what the government and military authorities have tried to cover up,” Choi said. “To recover the honor of the 46 fallen and 58 surviving crewmembers, I will continue to take action against the government and the Defense Ministry.”

Although the Cheonan sank more than 10 years ago, the sinking remains an enduring source of political controversy.

In April, the chairman of the Presidential Truth Commission on Deaths in the Military, Lee In-lam, announced his resignation on Tuesday over the commission's controversial decision to reopen a probe into the sinking following a request from Shin, before it backpedaled after facing outrage from survivors and their families.

Although the JIG issued a summary of its findings in May 2010, coming to the conclusion that the Cheonan sank due to a non-contact underwater explosion caused by a North Korean torpedo detonating close enough to the stern section of the hull to cause severe damage, that conclusion has been repeatedly assailed by those who claim the incident was an accident resulting from the ship running aground.