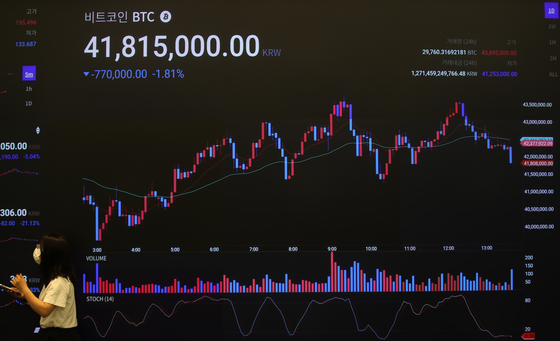 Bitcoin is quoted at 41.8 million won ($37,100) per coin on a board operated by cryptocurrency exchange Upbit in Gangnam District, southern Seoul, on Monday. [YONHAP]


Bitcoin’s rout is taking many companies down with it and leaving those who invested in either the token or related stocks with splitting headaches and regret.

One 35-year-old office worker claims that any word starting with the letter ‘b’ is enough to trigger him, as he bought 14 million won ($12,400) of shares of Coinbase, a U.S.-based cryptocurrency exchange, earlier in the month and is sitting on losses.


He thought the listed company would jump with the coin.

“Instead of directly investing in bitcoin, I bought bitcoin-related shares,” he said. “But I regret it very much.”

With the falling cryptocurrency prices, shares of coins-related companies are also plummeting at a rapid pace.

As of 4 p.m. Monday, bitcoin traded at 43.2 million won per coin on Upbit, Korea’s largest exchange by trading volume. Compared to April 13, when it broke the 80-million-won mark, it's down 47.2 percent.

Companies that have invested in Dunamu, which owns Upbit, are being hit hardest.

The price of Kosdaq-listed Atinum Investment, which owns 6.6 percent of Dunamu, dropped 15 percent on May 20 and May 21. It continued down Monday, and closed at 4,610 won, a 2.95 percent decrease from the previous trading session. 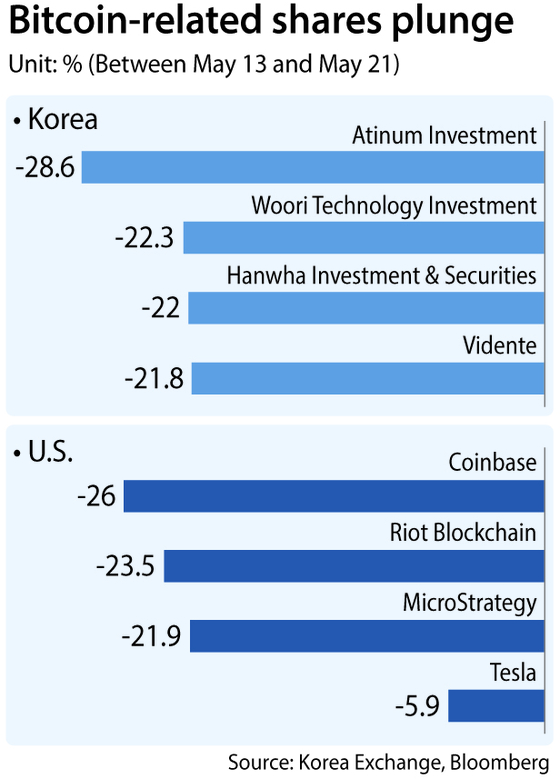 Shares of Vidente, a company that own 10.3 percent of Bithumb Korea, the operator of Bithumb, declined 1.58 percent to close at 9,350 won on Monday.

The situation is no different in the United States.

Shares of Riot Blockchain, a Colorado-based bitcoin mining company, fell 23.5 percent since May 12 and closed at $22.84 on May 21. During the same period, shares of MicroStrategy, a software company, plummeted around 22 percent. MicroStrategy is known to be a heavy investor in bitcoin, owning over $4 billion worth of the token.

The prices of cryptocurrency-related shares are likely to decline further for a while, market analysts say.

“As the price bubbles have been burst, it’s more likely that the prices of some foreign cryptocurrency-related shares such as Tesla would decrease further for a while,” said Pyun Deuk-hyeon, an analyst at NH Investment & Securities.

Many small cryptocurrency trading platforms may have to suspend their operations soon, and this is an another factor threatening Korean investors.

According to an amendment to the Act on Reporting and Using Specified Financial Transaction Information, all businesses dealing with the exchange, storage and management of virtual assets are required to find partner banks that issue real-name bank accounts by Sept. 24. Exchanges that fail to find partner banks must close.

Korea's four largest cryptocurrency exchanges ― Bithumb, Coinone, Upbit and Korbit ― have successfully partnered with banks, but some 100 smaller exchanges are struggling. The unregistered exchanges now only have about four months before they are forced to shut.

But other large commercial banks – KB Kookmin Bank, Hana Bank and Woori Bank — have recently decided to not issue real-name banks to cryptocurrency exchanges due to concerns over possible financial irregularities.

“Gains from cryptocurrency trading are not likely to be that big,” said a spokesperson for Woori Financial Group. “But the risks that we might have to take might be too great.”

“Based on the Act on Reporting and Using Specified Financial Transaction Information, we have continuously been requesting the cryptocurrency exchanges to improve their systems,” said a spokesperson for Shinhan Bank. “We plan to decide whether to renew the contract or issue the real-name bank accounts after seeing how their system improvements go.”