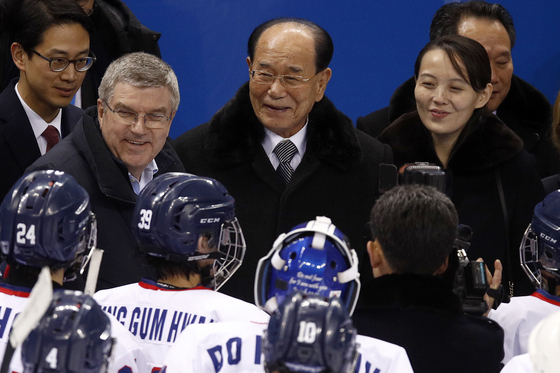 Pyongyang's decision to pull out of the Summer Games hosted by Japan from July 23 to Aug. 8 followed a meeting of its Olympic Committee on March 25, according to a report Monday on Sports in the DPRK Korea, a website run by its Sports Ministry.

The Olympic Committee of the Democratic People's Republic of Korea (DPRK) "decided not to participate in the 32nd Olympic Games in order to protect players from the world public health crisis caused by Covid-19," the report said.

This will be the first Summer Games skipped by North Korea in over three decades. It boycotted the 1988 Olympics because they were held in Seoul, and also joined a Soviet-led boycott of the Los Angeles Games in 1984. But North Korea has participated in every other Summer Olympics since its first in 1972.

South Korea had hoped the upcoming Summer Games would be a chance to resume dialogue with the North, reminiscent of the PyeongChang Winter Olympics in 2018, which paved way for a short-lived détente on the Korean Peninsula. The Moon Jae-in administration had also hoped that inter-Korean Olympic cooperation could help mend frayed bilateral relations with Japan.

An official from the South's Ministry of Unification told reporters Tuesday, "The government hoped that the Tokyo Olympics would serve as an opportunity to advance reconciliation and cooperation between the two Koreas and peace on the Korean Peninsula, but we regret that we will not be able to do so due to the of Covid-19 situation."

The official added, "Our government's position to advance peace and cooperation on the Korean Peninsula through joint teams in international sports events and sports exchanges has not changed."

Kim Yo-jong, North Korean leader's powerful younger sister, and then nominal head of state Kim Yong-nam led a high-level delegation from Pyongyang to attend the Pyeongchang Winter Olympics in February 2018 and held talks on the side with South Korean officials.

The two Koreas fielded their first combined women's ice hockey team for the Winter Games hosted by the South, and the two countries marched together under a Korean Peninsula flag at the opening and closing ceremonies.

The Olympic diplomacy led to an inter-Korean summit in April 2018 between President Moon Jae-in and North Korean leader Kim Jong-un and the first North-U.S. summit in Singapore that June between Kim and former U.S. President Donald Trump. There were three inter-Korean summits and three Kim-Trump meetings in 2018 and 2019.

The collapse of the Kim-Trump summit in 2019 put denuclearization negotiations in the deep freeze, and North Korea fired two short-range ballistic missiles on March 25 as an attention-seeking gesture as the Joe Biden administration finalizes a review of how to deal with Pyongyang. Seoul's diplomatic overtures have been rebuffed since 2019 as well.

Seoul's Ministry of Foreign Affairs noted that there is still time ahead of the Tokyo Olympics for Pyongyang to change its mind.

Choi Young-sam, spokesman for the South Korean Foreign Ministry, said in a press briefing Tuesday, "Our Foreign Ministry supports Japan's hosting of the Olympics while setting Covid-19 containment measures, and we look forward to North Korea's participation as time still remains and the Olympics is a celebration of world peace."

North Korea has been using strict border restrictions as coronavirus prevention measures since January 2020 and officially claims to have no Covid-19 cases.

Japanese Prime Minister Yoshihide Suga last week said he is still open to engaging in talks with the North Korean leader "without preconditions."

Last week, Seoul announced it had submitted a joint bid to the International Olympic Committee (IOC) to co-host the 2032 Summer Games with Pyongyang. This is in line with an agreement Moon and Kim reached in their Pyongyang summit in September 2018 to pursue a joint bid and would be the first time two countries co-hosted the Olympics.

The IOC in February announced that Brisbane was the preferred location for the 2032 Olympic Games, although the decision is not final.