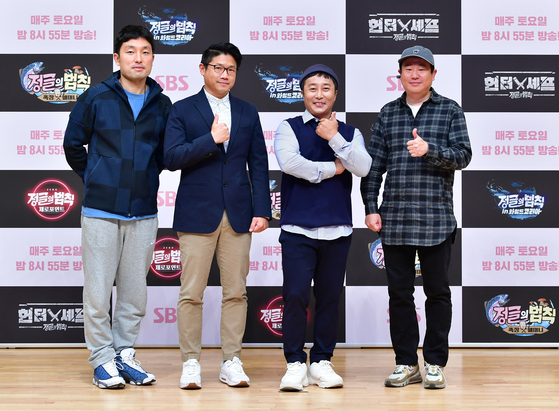 Producers Park Yong-woo, Kim Jun-su, entertainer Kim Byung-man and producer Kim Jin-ho pose for the camera at an online press event for their variety show "Law of the Jungle" on Monday. [SBS]


Entertainer Kim Byung-man who is often referred to as the “clan leader” on variety show “Law of the Jungle” says surviving in remote areas in Korea was more challenging than surviving in Africa, the Amazon rainforest, or the South Pole.

Long-running SBS variety show "Law of the Jungle" that took celebrities out of their comfort zones on wild adventures in overseas wildernesses announced it will go on a hiatus due to the Covid-19 in June, but came back earlier than expected in August by filming in Korea.

“The 'Law of the Jungle — Wild Korea’ series aired in August was the first series to shoot on uninhabited land in Korea,” Kim said during an online press event on Monday. “I’ve been to beaches along the western coast numerous times since I was young, but surviving in an uninhabited land in the Yellow Sea was a completely different story. There was nothing to eat and fish were difficult to catch, and the cold water of the west coast made it even more difficult to stay in the water for a long time.”

The producer of the show Park Yong-woo said that being unable to go overseas seemed like a crisis, but was, in fact, a new opportunity to introduce new parts of Korea that have never been exposed to the public.

“Since they are parts of our country, they may seem easily reachable but at the same time very distant because they are uninhabited lands,” producer Park said. “I thought it would be interesting to show the greyish color of the water of the west coast, that can serve as a great contrast to the emerald green ocean we had seen in foreign seas.”

The "Law of the Jungle — Hunter and Chef" series that aired in September hosted celebrity chef Im Ji-ho to cook dishes using seafood that Kim and his clan caught from the island on the west coast, including a spicy noodle soup and soup using the intestines of abalone.

“It was fun to make a chef’s kitchen from the wilderness,” Kim said. “The hardest time was when I, the hunter, couldn't catch the prey that the chef had ordered.”

In the most recent series, which is still ongoing, participants used the upcycling method to make survival tools out of trash collected from the island.

"I was so grateful for those piles of trash in the sea because it would’ve been impossible to survive without them. If I had enough time, I could've even built a treehouse out of garbage."

Standing above the law (KOR)