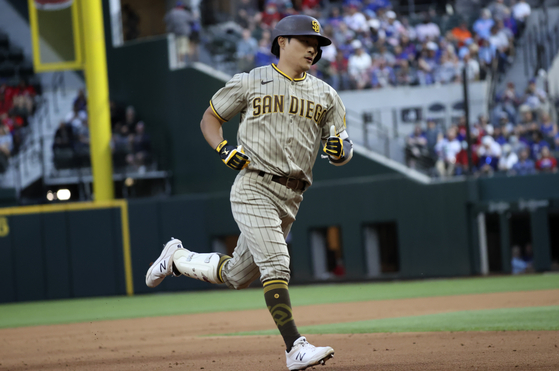 
Kim Ha-seong of the San Diego Padres hit the first home run of his major league career on Saturday, going deep in only his eighth game in the MLB.

It was a quiet start for the Padres, falling behind 3-0 in the first few innings. The California team started to fight back in the fourth, with a home run from Eric Hosmer getting the Padres on the scoreboard. Tommy Pham quickly added on with a sac fly that brought Will Myers across the plate to take the score to 3-2.

An inning later, and it was Kim's chance to shine.

Kim started things off at the top of the fifth, seeing one ball and one strike before hammering a curve ball from Rangers' starter Jordan Lyles into left field. The towering hit traveled 388 feet before bouncing off the foul pole for the home run.

Kim's homer tied the score at 3-3, although the Rangers quickly came back at the bottom of the fifth to take the lead again.

After a quiet sixth, the Padres came back with a vengeance in the seventh. With one out at the top of the inning, Kim took four balls for a walk to first base. Trent Grisham was up next, homering to right field to bring Kim around for his second run of the game.

The Padres added one more in the seventh and one in the eighth to take the final score to 7-4.

It took Kim 19 MLB at bats to reach his first home run. Kim went one for two in the game with a walk and a hit-by-pitch in the third inning. Across 20 at bats in the majors, Kim now has three runs on four hits, two RBIs and a home run. He has an MLB career batting average at .200.

Kim got off to a slow start during spring training with the Padres, picking up seven hits in 42 at bats with one RBI. Since the season has started, he appears to be adjusting, with his batting average creeping up in recent games.