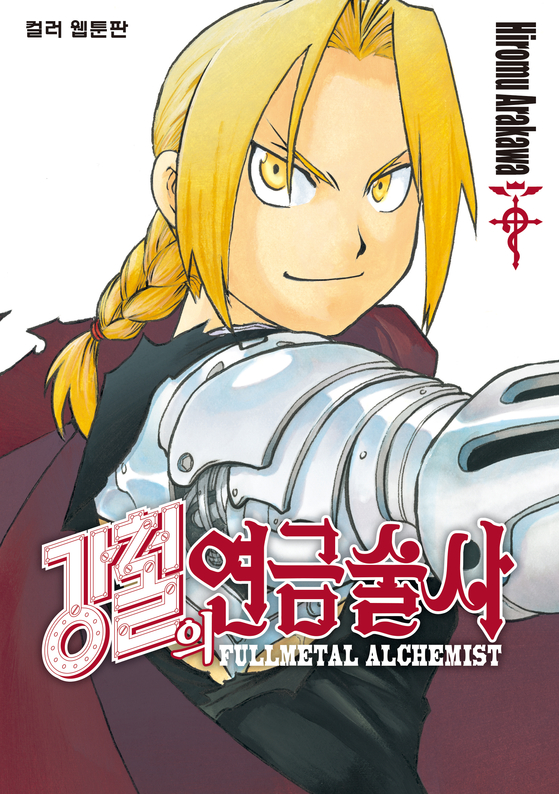 
The “Fullmetal Alchemist” manga series is considered one of the most well-written comic books of the 21st century, revolving around the fictional country of Amestris where alchemy allows people to create any desired outcome with the right amount of ingredients and a special pattern called the transmutation circle. Written by Hiromu Arakawa, it has been adapted into animation series, live-action films, audio dramas and video games. One of these adaptations pioneered in Korea is webtoon.

Kakao Page began a webtoon version of “Fullmetal Alchemist” last year in August. Rather than just taking apart each scene from the original black-and-white book version and arranging them into a down-scroll order, Kakao Page “reinvented it as a Kakao Page original work.” All scenes have been colored and restructured to fit the webtoon format by Korean production company Haksan Publishing and approved by the Japanese publisher.

“We preserved the sentiment of the original work, while giving new life to the cuts that were hidden behind the fancy effects and speech bubbles [within the comic book version] to maximize the reading experience,” explained Kakao Page.

Ever since the early 2000s, online comic platforms — including the three major companies Naver, Daum and Lezhin — have been readily uploading scanned images of existing comic books in their full-page format. Readers could rent each book at a cheaper price or download the file to keep for themselves. Many of them are available on webtoon platforms in the same format, but turning existing comic books into webtoons is a whole new approach. 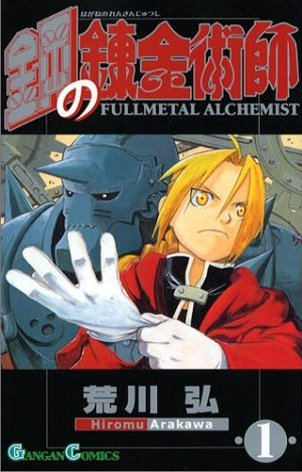 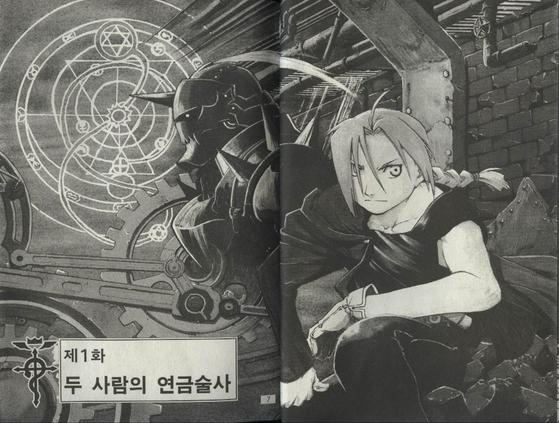 
The most obvious difference between comic books and webtoons is that the latter is read from left to right in Korea and right to left in Japan. Authors are free to divide up the space within the paper to create each scene but the pictures are restricted to the real-life size of the book. But according to Jang Yun-ho, member of the board at the Korea Cartoonist Association who has been transitioning to a webtoonist himself, the change embodies more than just the direction of the reading experience.

“A scroll-down format allows unlimited space downward, but it also flows down along with the flow of time,” said Jang. “The basics of narrative have not changed, but every detail of how it is shown has. Cartoonists typically worked with assistants to help them fill out the details, but in the webtoon industry, it’s common for a webtoonist to have a separate story writer, background illustrator, colorist and storyboard writer.”

According to Park Seok-hwan, webtoon critic and professor of comic content at the Korea University of Media Arts, the small digital screen forces authors to focus on the characters rather than the meticulous details which are typically the focus in comic books. Readers of the original version may feel like things are "missing," but the webtoon format "helps people understand individual characters' thoughts and emotions much better."

The novelty of the new format certainly has readers excited. “Fullmetal Alchemist” has been seen by over 650,000 readers on Kakao Page with more than 10,000 comments. “Wow, this is crazy. It seems like they’ve just drawn everything again from scratch. Fine. Take my money,” reads a comment in the first episode with 2,100 likes. “A webtoon? And in color too? Wow,” reads another comment, also with 2,000 likes. Other comments compliment the fresh approach to the famed work as well as how the colors add new life to the characters and scenes. 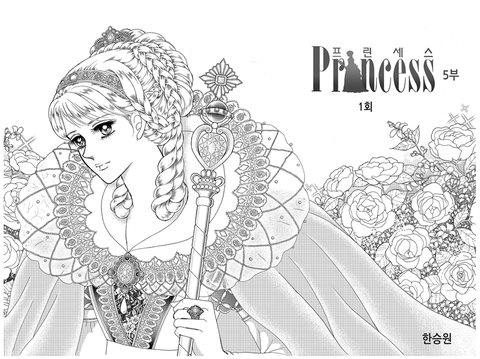 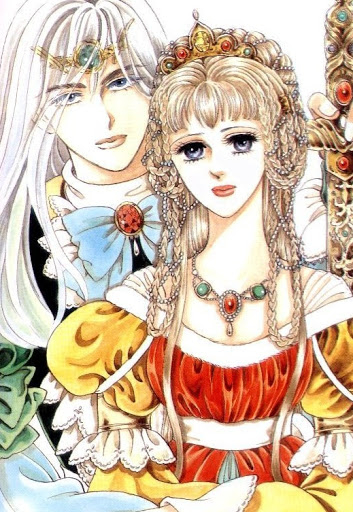 
Yet a very stark contrast is seen in the comment section of another famed comic book series that has been turned into a webtoon on Kakao Page. “Princess” by Han Seung-won is one of the most popular and famous romantic comics in Korea that started in 1995 and has not been finished yet due to the authors’ health. “Princess” revolves around the fictional nation of Lamira and its surrounding countries. Politics keep the young prince Biyon and his childhood best friend and lover Vee apart from each other, but they sacrifice everything they have — even their country — for their love.

Thirty-one comics have been released so far, but later episodes were only published online. After serializing her work in magazines from 1995 to 2006, “Princess” took a long break from 2007 to 2014, shortly after Han began posting her work on Daum Comics. Han started publishing work again on Naver in 2014 but spent the first seven months “retouching” the existing episodes and only began unveiling new parts of the story in January 2015. Then in June 2015, “Princess” went on another hiatus.

Her return came after six years on April 4, but again, to a different platform. Because of such comings and goings, readers were divided about how to perceive the makeover of “Princess.” The colored rework was done by Princess Production, the publisher of “Princess” books and webtoon.

“Honestly, this is just ridiculous,” reads a comment on the first episode of “Princess” with 1,300 likes and almost 200 replies. “You started with magazines, took a break, went to Naver, took a break and now you’ve taken down the works on Naver and have come to Kakao Page? What about the people who waited for you to come back to Naver? And can we honestly see this, which started in 1995, end?” 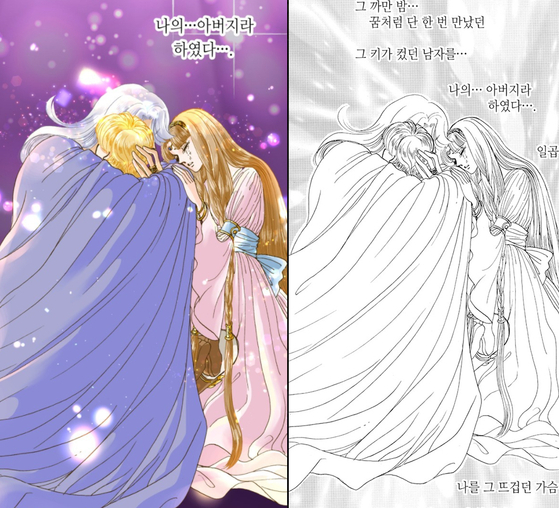 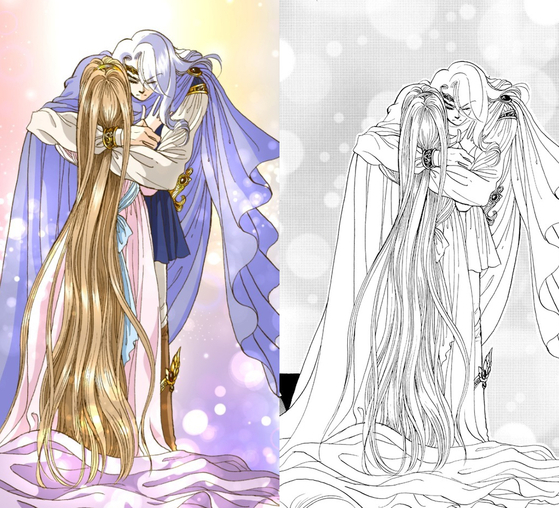 
Replies agreed that the author had switched between different platforms too often and pointed out that the quality of the colored version was worse than the original black and white version. Many expressed dismay at the fact that it would take months — if not years — for the story to finish.

But others admired that Han did not give up on her story and hoped that she would not overwork herself amid her health issues.

Kakao Page explained that it chose the two works because they were popular among existing fans around the world and they wanted to present them to new readers who would be more acquainted with the webtoon format. Most scenes were reformatted to best fit the mobile screen but some were totally recreated “to give the best experience to readers.” Kakao Page readily experiments with new content and formats, such as moving-toons, which tried to use moving images for its webtoons, but did not see much success.

"The fact that content creators are experimenting with new formats is very positive," said Professor Park. "People may have different ideas and show varied reactions to each work and if this new challenge doesn't turn out to be successful, then there won't be others to follow. But reviving old works will not only give existing fans a chance to enjoy their favorites again but also give new readers a chance to see what old works can offer them. While the two works have received very different reactions, it's likely that other works will follow in the future."