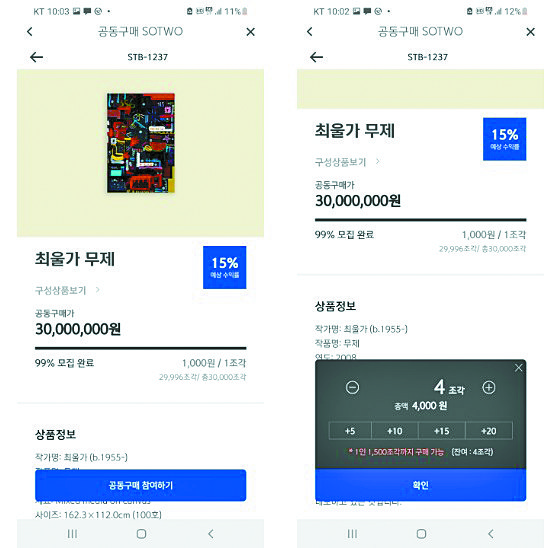 On April 9, Choi Wool-ga's ″Untitled″ was split into 30,000 shares and sold out in just three minutes. [SCREEN CAPTURE]

The offering sold out in three minutes despite a cap on the number of shares each person can buy. Choi Young-wook’s “Karma,” a minimalist 2018 work, sold out in just a minute, with 40,000 shares at 1,000 won on offer.

This is what happens on Sotwo, an art purchasing platform developed by Seoul Auction Blue and Shinhan Bank.

Sotwo, which is hosted on Shinhan SOL, has been offering art since late January. Paintings by artists like Lee Woo-hwa and Chun Kyung-ja are available for fractional ownership every Tuesday and Friday on 10 a.m.

Under the joint-ownership system, the total value of each artwork is equally divided and sold for 1,000 won per share. The purchase ceiling varies from as little as 20,000 won to millions of won.

With artwork available at a lower price, the art market is no longer the preserve of the rich.

After collectors purchase their shares, information on ownership is place on a blockchain. When the artwork is later sold at auction, buyers divide the total price and split the profit.

Investments on Sotwo have gained an average of 18.5 percent over the past two months prior to April 9, with some investments gaining 211 percent. Attracted by high returns, buyers have spent a total of 1.7 billion won on 79 artworks between the service’s start date and April 9. 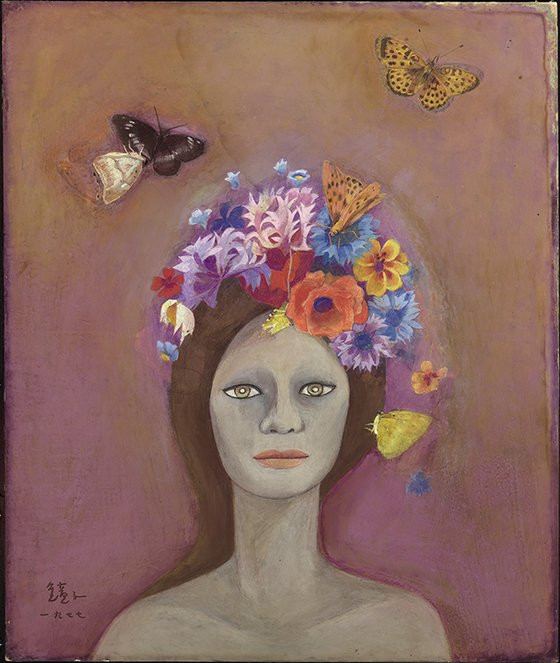 
For banks, art financing is a way of creating non-interest revenue and finding a use for the blockchain.

Shinhan Bank is planning to go further than providing blockchain-based art trading, preparing to release their own blockchain wallet system.

Apart from high net worth clients, young clients are also a target. Sixty percent of fractional art purchases are by those in their 20s and 30s, according to Shinhan Bank.

“The art market, which once populated by a small number of collectors, is now becoming popular amid increasing demand among young Koreans and art becoming well-known as a source of investment,” said Ahn Joo-won, analyst at Yuanta Securities.

Tax benefits is another contributing factor.

Twenty percent tax is imposed when selling artwork with a price of 60 million won and above, as gains on artwork is considered as “other income,” according to the income tax act. This is taxed at a rate of 20 percent due to recent reforms.

“Due to the amendment of the income tax act, art has now become an attractive investment,” said Samsung Securities analysts Lee Hyuk-jin.

Some art is entirely exempted from taxes. Artwork of local artists who are still alive is not taxed regardless of gains. Tax is also not levied when selling state-designated cultural property to museums and galleries. Sculptures are also exempt.

Despite the booming art market, investors must be cautious since art can be difficult to trade and price are volatile.

“Art has low liquidity because investable art is limited as well as investors,” said Cho Jae-young, the vice president of Wealthedu, a financial education company. “People need to consider art as a type of an alternative long-term investment and a place to invest spare cash only.”