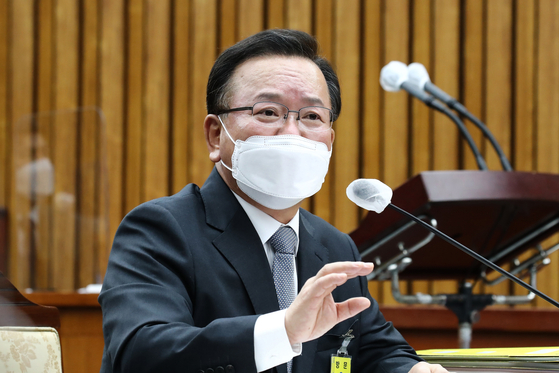 "If I take office, I will meet with the business leaders, collect their opinions and relay them to President Moon," Kim Boo-kyum, prime minister-nominee, said during his confirmation hearing.

The National Assembly on Thursday started a two-day confirmation hearing for Kim. Last month, Moon nominated the 63-year-old politician, who had served as minister of interior and safety for his administration from 2017 to 2019, as the new prime minister. Kim requires the National Assembly's approval after the confirmation hearing to assume office.

At the confirmation hearing, Rep. Kim Yun-duck of the ruling Democratic Party (DP) asked Kim Boo-kyum about his view on the growing demands that Moon issue a special pardon to Samsung Electronics Vice Chairman Lee. Lee is in jail for bribery convictions, having been found guilty of giving massive bribes to former President Park Geun-hye through her longtime friend Choi Soon-sil for political favors. He has 15 months left to serve out of his sentence of two and a half years.

"I understand that voices are growing to accommodate the special need for Samsung, a competitive company in the semiconductor industry, considered the key for future growth," Kim Boo-kyum responded. "If I am appointed [through the National Assembly approving my nomination], I will meet with business leaders, and I will relay their opinions to the president."

Rep. Kim, then, commented that it is necessary to consider the public sentiment, since granting a special pardon to Lee will infringe upon equality and fairness. The prime minister-nominee, however, made clear that he will still ask Moon to think about freeing Lee.

"And yet, the Constitution gives the power to the president. I think it is because the president has to think seriously about [granting a pardon] and whether or not it is necessary for the country," he said.

Rep. Lee Eun-ju of the Justice Party asked Kim what he thinks about the situation, should Samsung's Lee be pardoned, just like Lee's late father was during the presidency of Lee Myung-bak. She criticized that it is unfair that the Lee family receives special treatments one after another.

Kim responded that he understands the concerns, but the business leaders must have requested Lee's special pardon for a reason. "I must at least summarize their opinions and recommend it to the president," he said.

The Blue House has been adamant that it is not considering a possibility of granting a special pardon to Lee.

After five major business lobbies formally asked Moon on April 27 to pardon Lee to help Korea maintain its dominance in semiconductors, a presidential aide said, "We have not yet considered a possibility, and we have no plan to do so."

DP Rep. Lee Won-wook, chairman of the National Assembly's Science, ICT, Broadcasting and Communications Committee, also pressured Moon to pardon Lee. "Taking into account the supply situation of semiconductors and investments in the United States, there is a very big need, not small, to pardon Lee," he said in a radio interview on Tuesday.

He also said that as the people's demands that Lee be pardoned are growing, Moon must seriously consider the possibility.

Following the senior DP lawmaker's remarks, a high-ranking presidential aide said the Blue House's position remains unchanged and is not considering the possibility of freeing Lee.