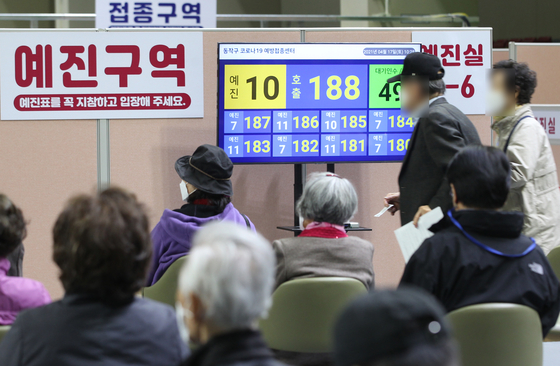 Senior citizens wait to get Pfizer shots at a Covid-19 vaccination center in the Sadang Sports Complex in southern Seoul on Saturday. [YONHAP]


U.S. planning for Covid-19 vaccine booster shots may result in another setback in Korea’s vaccination campaign.

A White House official said in a congressional committee meeting on Thursday that the U.S. is preparing for the possibility that a booster shot will be needed between nine and 12 months after people are initially vaccinated against Covid-19.

These boosters refer to an extra dose of a vaccine after the initial series of injections in order to maintain immunity.

Vaccines that require two shots, such as those from Pfizer and Moderna, would be subject to a third booster shot.

“A likely scenario is that there will be likely a need for a third dose, somewhere between six and 12 months,” said Bourla, according to CNBC. “And then from there, there will be an annual revaccination, but all of that needs to be confirmed. And again, the variants will play a key role.”

Moderna CEO Stéphane Bancel also said on Wednesday that the company hopes to have a booster shot ready by fall. Moderna had previously announced that it will deliver 200 million doses to the United States by the end of July, possibly pushing back the deliveries promised to Korea and other countries.

Health authorities said they will hold discussions with experts regarding the need for booster shots, while monitoring the world’s situation.

"We will discuss with experts whether we should vaccinate again after a certain period of time after the first and second shots,” said Bae Kyung-taek, a health official from the Covid-19 vaccine task force, during a regular briefing Friday.

Bae added that an investigation on the duration of vaccine efficiency is currently being held, saying, “We will review the results comprehensively along with foreign cases and will discuss within expert committees whether we need to change our decisions.”

Sohn Young-rae, a high-ranking official from Korea’s Ministry of Health and Welfare, said in a briefing earlier that “[The booster shot] is a matter of issue to be decided after seeing the data and global trends,” adding, “Now is early to discuss its impact [on Korea’s vaccine supplies.]”

Currently, vaccines for 79 million people have been procured by the government, and 11.4 percent of the total — for just over 9 million people — will be delivered in the first half of the year.

Korea earlier announced that it would procure vaccines from Janssen, Moderna and Novavax in the second quarter, but the dates and initial delivery amounts have not been confirmed.

The AstraZeneca vaccine accounts for about 60 percent of the total, with 10,674,000 doses, but the jabs are halted for people under 30 after reports of rare blood clots. Janssen vaccine inoculations have also been paused in the United States and several other countries for the same reason.

AstraZeneca vaccine administration will begin Monday for health care workers for the disabled, seniors and veterans as well as to flight attendants. People under 30 years old are still excluded from the inoculation.

Doctors, nurses, pharmacists and dialysis patients will be eligible for the AstraZeneca vaccine the following Monday on April 26. 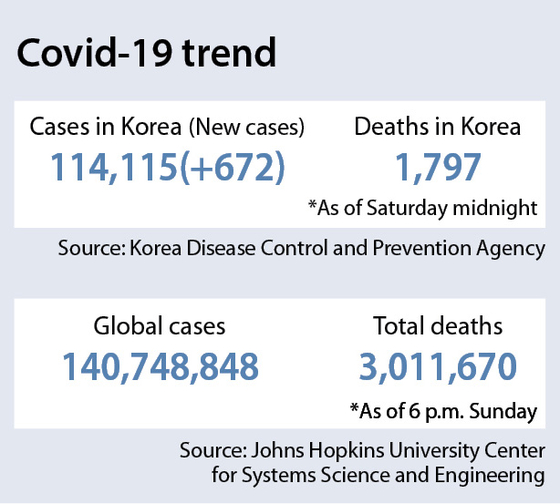