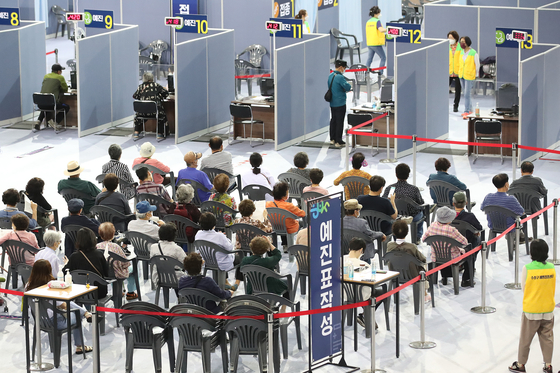 People wait to get shots at a vaccination center in Suseong District, Daegu. [NEWS1]


Starting in July, all adults in their 50s, school teachers and high school seniors will be eligible for their first Covid-19 shots, which will be expanded to everyone over 17 from August.

The Covid-19 Vaccination Task Force announced its vaccination plan for the third quarter on Thursday with the aim of inoculating a total of 36 million people, or 70 percent of Korea’s population, by the end of September.

In the first three weeks of July, the government will first offer jabs to around 170,000 people whose vaccine appointments were delayed due to supply shortages.

High school seniors and high school teachers — those associated with the all-important college entrance exam in November, known as the CSAT — will be given Pfizer shots from the third week of July, while CSAT test takers who aren't seniors can get their first shots in August.

All other teachers — from daycare centers through middle schools — will be offered either Pfizer or Moderna shots from the third week of July.

In the fourth week of July, inoculations for people in their 50s — estimated to number around 8.68 million — will kick off. The vaccine type has yet to be confirmed.

People between the ages of 55 and 59 will get their shots in the fourth week of July; those aged 50 to 54 are scheduled for early August.

In August, all the rest of the adult population — people aged between 18 to 49 — will be eligible on a first-come-first-served basis.

The plan for people aged 12 to 17 and pregnant women will be made after reviewing scientific opinions, health officials said.

Mix-and-match vaccination, or giving two different vaccines for first and second shots, are also set to begin in Korea from July after AstraZeneca doses fell short. The delivery of 835,000 AstraZeneca doses by the Covax facility, or the World Health Organization (WHO)'s vaccine-sharing mechanism, was pushed back from late June to late July.

As a result, around 760,000 home-visit caregivers, medical workers at clinics and pharmacies, essential personnel and chronically ill people who got their first AstraZeneca shots in April will get Pfizer second doses in July.

“Foreign studies on mixing and matching vaccines have shown that inoculation of an AstraZeneca first dose followed by a Pfizer vaccine as a second dose gives a strong immune response and is safe,” explained the task force.

The government also announced Thursday it would give vaccination authority to local governments and also to large steel and automobile companies that operate around the clock. They can offer jabs to their essential workers at the workplace. 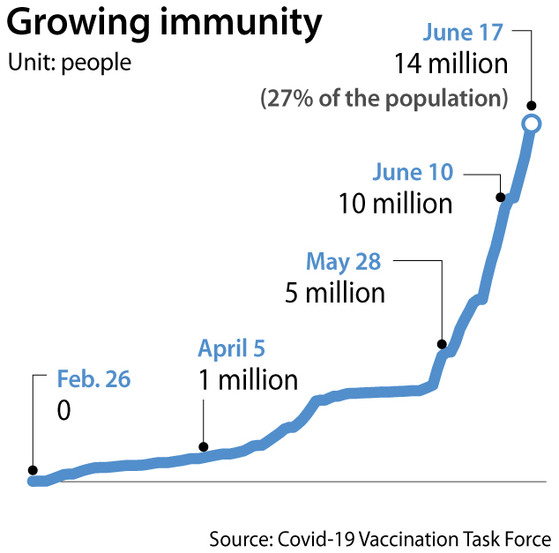 Already over 14 million people, or around 27 percent of the total population, received one dose of a Covid-19 vaccine as of 12 p.m. Thursday, the Korea Disease Control and Prevention Agency (KDCA) said.

“In order to find a path out of Covid-19 and a return to daily life, a swift and safe vaccination is most important,” said Jeong Eun-kyeong, commissioner of the KDCA, urging people to receive vaccines during their designated periods so Korea can achieve herd immunity by the end of November.

On Thursday, inoculations of the Moderna vaccine, the fourth vaccine approved in the country, began for medical personnel at upper-level general hospitals and medical students aged under 30.

The Moderna vaccine, which is a mRNA vaccine like that of Pfizer, requires two doses given four weeks apart. 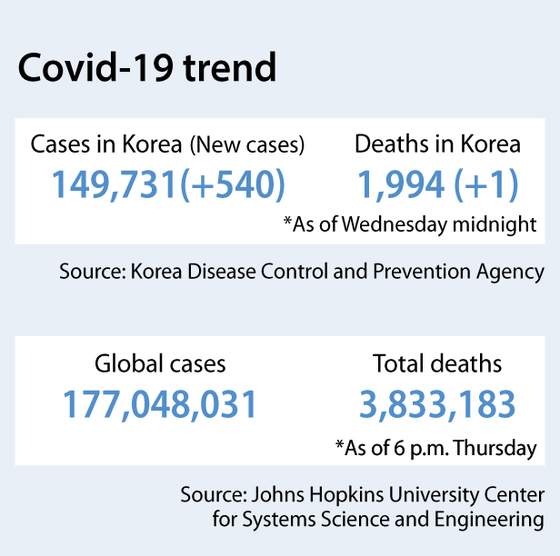 The country reported 540 new Covid-19 cases on Thursday, including 523 local infections, raising the total caseload to 149,731, the KDCA said.

The country added one more virus death, raising the death toll to 1,994.