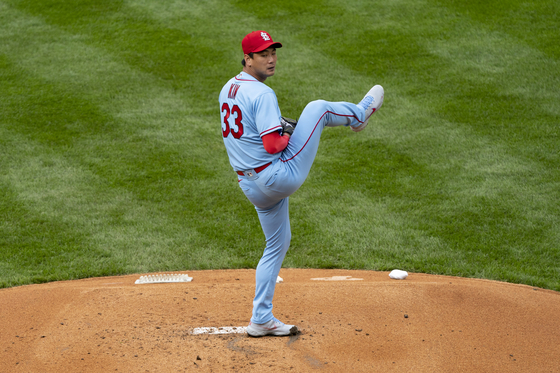 
Kim Kwang-hyun of the St. Louis Cardinals gave up three runs in three innings for a no decision in his first game of the 2021 season against the Philadelphia Phillies at Citizens Bank Park in Philadelphia on Saturday.

Kim pitched three full innings, giving up five hits, three runs and one walk with four strikeouts for a 9.00 ERA in his game of the year. Kim had started the 2021 season on the injured list due to back tightness during spring training.

Kim got roughed up in the first inning against the Phillies, allowing two hits and a hit-by-pitch with two out to give Philadelphia a 1-0 lead.

After a quiet second, Kim allowed two more runs at the bottom of the third. Luckily for Kim, the Cardinals' batting lineup had also been busy, scoring six at the top of the third so that Kim left the mound with the score at 6-3.

Saturday's game also saw Kim at bat for the first time in his professional career. As the KBO operates a designated hitter system and both major leagues adopted the system last year to avoid overtaxing pitchers during the coronavirus pandemic, Kim has played 14 years of professional baseball without ever stepping up to the plate.

Despite his lack of experience, Kim didn't go down swinging. He grounded out in his first at bat at the top of the third, getting some contact to start off his fledgling hitting career. His second chance came later that same inning, when he was able to get on base after a throwing error from Phillies third baseman Alec Bohm.

Kim was out the game from the fourth inning, but the Cardinals continued to pile on, scoring three more in the fourth and giving up one in the fifth to end the game at 9-4.