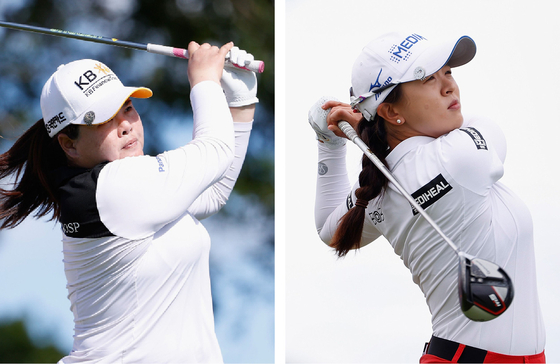 
Kim Sei-young and Park In-bee tied second at the 2021 Lotte Championship at the Kapolei Golf Club in Hawaii on Saturday.

Ko’s last victory was at the 2018 Mediheal Championship.

"When you're in that position [to win] and it doesn't happen, you do doubt. If I said, 'No, I didn't doubt myself at all,' that would be a lie," Ko told Golf Channel.

This time, the Korean-born New Zealander was back with four rock-solid rounds.

Backed up with 67, 63, 65 in the first three sets, Ko entered the final round with just a one-shot lead but whisked in front of her contenders, capping off seven-under-par on the last day.

Ko’s 28-under is the third-lowest LPGA 72-hole score of all time — the lowest is Kim Sei-young’s 31-under at the 2018 Thornberry Creek LPGA Classic.

Coming in tied for second, Korean golf stars Park and Kim both played their best in the final round.

Kim marked 67, 67, 65 in the first three sets, managing to keep her score under 70 for six straight rounds ever since the last two rounds of the 2021 ANA Inspiration tournament held during the first week of April.

Backed up with a 14-under in the first three rounds, Kim started the final round with an impeccable birdie on the par-5 first. Kim was on fire, managing to pull off three birdies in the first nine holes and an eagle on the par-5 seventh on top of that.

Kim finished a bogeyless final round, finishing the tournament tied second alongside three other players including Park.

“Though I didn’t get to win, I am glad that I was able to score lots of birdies that pulled up my rank” Kim said, adding, “If I can continue to be on my game as I did this week, I feel like I can also do well at the upcoming LA open.”

Kim holds the 2015 Lotte Championship title and won her first major title last year at the 2020 KPMG Women’s PGA Championship. She currently sits at No. 3 on the Rolex World Ranking.

Park was able to pull herself ahead to second place with a remarkable bogeyless nine-under-par in the final round, despite having entered the final round tied for 16th.

Park’s final round shots were spot-on, marking seven birdies and an eagle on her last day.

Just when it seemed she could not be playing any better, Park sunk three consecutive birdies to the very last par-4 18th.

Despite Kim and Park each scoring one eagle in a bogeyless final round, both found themselves as runners-up this time.

Including Kim and Park, a total of five Korean golfers finished in the top 10 — Jenny Shin tied at sixth with 19-under-par and Kim A-lim and Amy Yang tied at 10th with 18-under-par.

The next LPGA tournament, the Hugel-Air Premia LA Open, takes place on Thursday at Wilshire Country Club in Los Angeles.

Korean-Australian Minjee Lee stands as the defending champion from the 2019 Hugel-Air Premia LA Open as the event was canceled last year due to the pandemic.