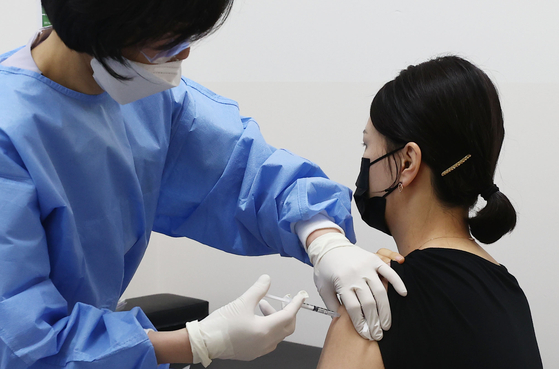 An airline crewmember receives an AstraZeneca shot in a hospital in Gangseo District, Seoul on Monday, as the country rolls out vaccinations for care workers and airline crew. [YONHAP]


A 45-year-old nursing assistant who was vaccinated with the AstraZeneca vaccine has been hospitalized after suffering short-lived paralysis of her arms and legs.

Korea suspended AstraZeneca jabs from April 8 to 11 after three cases of blood clots were reported, but a case of quadriplegia has never been reported.

According to Rep. Suh Jung-sook, a member of the Health and Welfare Committee of the National Assembly, the nursing assistant received the AstraZeneca shot on March 12 and suffered from headaches for about a week. Then she started suffering from double vision on March 24.

The nursing assistant was hospitalized on March 31 and diagnosed with acute demyelinating encephalomyelitis (ADEM), an immune response-related reaction, according to Rep. Suh, and then suffered from paralysis in her limbs. She is being treated in a hospital and recovering.

People Power Party’s Rep. Suh said Monday that the nursing assistant was healthy with no underlying diseases before she received the AstraZeneca shot, and she received "no abnormal findings" from a health check-up in January.

"If a disease that is rare in itself is found in a healthy woman in her 40s, it is inevitable to think that it is related to vaccination,” said Suh, who has a doctorate in pharmacology.

"An epidemiological investigation was held ... and we will conduct additional tests after a month to make the final diagnosis,” Park Young-joon, head of the abnormal response investigation team of the country’s Covid-19 vaccination team said in a briefing on Monday.

Doctors, nurses, pharmacists and dialysis patients will be eligible for the AstraZeneca vaccine on April 26.

Health authorities also announced Monday that 7 million doses of AstraZeneca vaccines will be delivered to Korea in May or June, which will be used for people over 65. 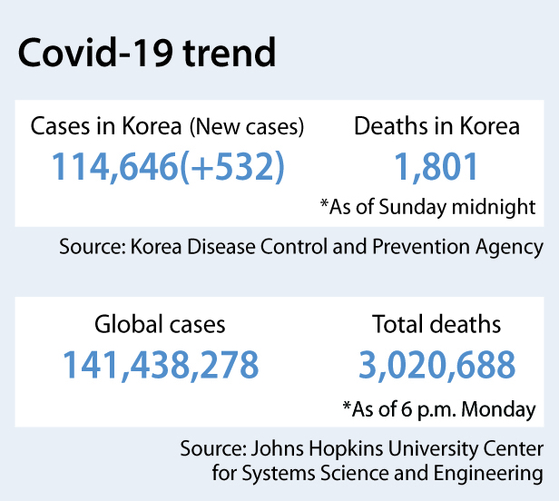 Korea reported 532 new coronavirus cases as of Sunday midnight, including 512 local infections. The country’s cumulative caseload was raised to 114,646.

Health officials warned about Covid-19 variants that are believed to be more contagious, as a double mutant virus variant from India was introduced to the country in addition to variants from Britain, South Africa and Brazil.

70 new variant cases were added, according to the Korea Disease Control and Prevention Agency (KDCA) on Monday.

Health officials cited "virus variant" as the main factor for the coronavirus case increase during the past three weeks.

"The number [of new Covid-19 cases] in Korea has been increasing for three consecutive weeks, and the aggravating factor is the spread of the virus variants, especially the one from Britain,” said Jeong Eun-kyeong, commissioner of the KDCA. “We are estimating [the British variant to be] about three to four percent of the total variant virus cases being investigated, but it is likely to increase.”

The KDCA reported nine cases of the Indian variant, which were confirmed in five Koreans and four foreigners coming from India.

As a result, the government plans to strengthen quarantine rules to combat virus variants in Korea.

“Regarding the South African variant, we will isolate entrants coming from high-risk countries in a separate facility starting from April 22 to stop the inflow into the country,” said Jeong.