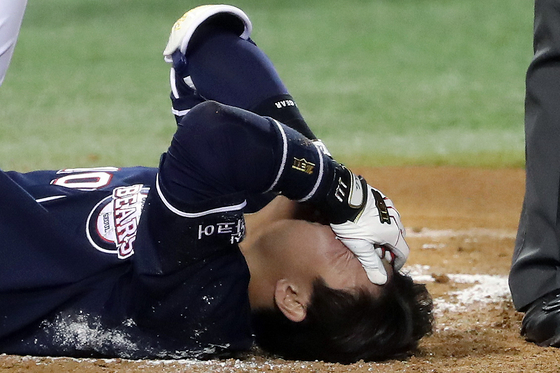 Park Sei-hyok lies on the floor in agony after getting hit in the head by a pitch during the eighth inning of a game between the Doosan Bears and LG Twins at Jamsil Baseball Stadium in southern Seoul on Friday. [NEWS1]


Doosan Bears catcher Park Sei-hyok received surgery on Monday and is expected to be discharged from hospital later this week, the team has announced.

Park, a key member of the Bears' defensive and offensive lineup, took a pitch to the face during a game against the LG Twins on Friday. The pitch, from Twins reliever Kim Dae-yu, appeared to hit both Park's face and helmet, possibly propelling the chin guard into his eye.

The Bears will announce how long they expect Park's recovery to take after he is released from hospital later this week, with local media predicting he'll be out for at least 50 days. There may be no position on the field where hand-eye coordination is more important than the catcher, and an eye injury could seriously impact Park's game for a lot longer than 50 days.

After years waiting on the sidelines behind Yang Eui-ji, now of the NC Dinos, Park burst onto the scene in 2019, combining solid catching and offensive with one skill that isn't traditionally part of the catcher's arsenal — speed. In 2019, when Yang's loss was expected to cripple the Bears, Park led them to a pennant and championship title, immediately earning the respect of fans.

He's been off to a slower start so far this season, with five hits in ten games for a 0.161 batting average.