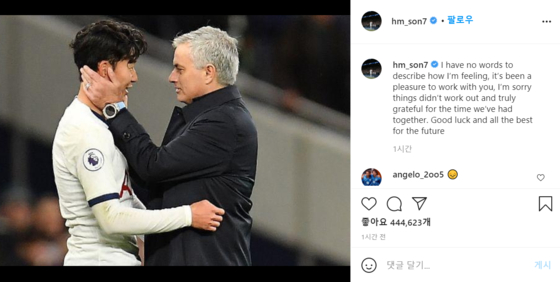 
PARK JIN-SEOK
The author is a national news editor of the JoongAng Ilbo.

I could be called a patriotism-driven football fan. To me, Jose Mourinho, former head coach of Tottenham Hotspur, was an enemy. I started watching European football in the mid-2000s, and he was the opposition, interfering with Park Ji-sung and Manchester United’s victories. But he was a “special enemy.” Having surprised the world by leading the relatively weak FC Porto to the UEFA Champions League, Mourinho took the leadership of Chelsea. Young and confident, he didn’t hesitate to call himself the “special one.” And he was indeed special. He knocked down longterm rivals Manchester United and Arsenal and steered Chelsea into its golden days.

At Inter Milan, he defeated Barcelona and Bayern Munich and took the team to the top of the European league. He became the hero after winning the “treble,” including winning the league and the Coppa Italia. It was the pinnacle of his career. Mourinho’s style was to lock the backdoor and strike back to score. Even those who criticized him as anti-football cannot ignore that his method worked.

But things started to crack when he took the helm at Real Madrid. Compared to rival Barcelona, his report card was poor. The same old pragmatic game could not get break through against the innovative tiki-taka football. He blamed others and split up the team. He dishonorably stepped down and went downhill from there. He was dismissed from Chelsea and Manchester United after two and a half years, leaving discord and feuds.

By the time he joined Tottenham Hotspur, Mourinho seemed changed. He said he was no longer the “special one,” but a “humble one.” But his tactics didn’t change, and he continued the controversy of dividing the team to take a side. After a year and a half, he was discharged on the day after 12 teams, including Tottenham, announced the launch of the European Super League. Few believe that 58-year-old Mourinho can become the special one again.

I once again affirm the truth that adhering to an idea that worked once will eventually lose the base without changes and innovation. Also, blaming others and taking a side are a catalyst for failure. These are not truths that apply to football alone.