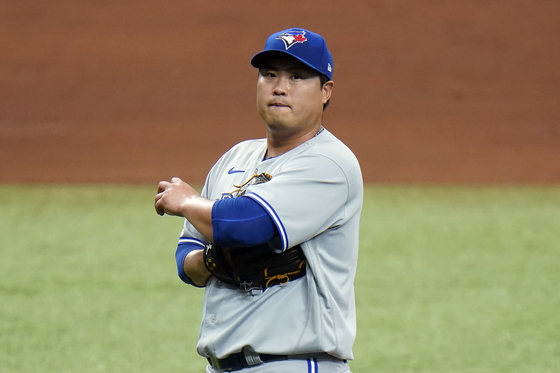 
Toronto Blue Jays manager Charlie Montoyo appears optimistic about Ryu Hyun-jin's condition after he was removed from a game on Sunday with what was said at the time to be a glute strain.

Ryu left the mound in the fourth inning after throwing 62 pitches against the Tampa Bay Rays on Sunday. The Blue Jays later announced he had a "minor glute strain."

Ryu's opinion seems to be shared by Montoyo, who told reporters after the Blue Jays game against the Washington Nationals on Tuesday that Ryu is "doing well."

Montoyo described the injury as "day-to-day" and said that Ryu is unlikely to miss his spot in the rotation. While Ryu could get an extra day of rest, the Blue Jays are not expecting him to miss a start.