Investors are rushing to altcoins as their prices rocket, while the bitcoin rally is running out of steam.

Altcoins, or alternative coins, are cryptocurrencies other than bitcoin.

Ethereum has been on the rise recently after the European Investment Bank announced last month its debut digital bond is issued on the Ethereum blockchain platform. The token's price surged to over $3,400 Tuesday after breaking $3,000 Monday, according to CoinMarketCap.
The token traded at $3,360 per coin as of 5:45 p.m. Wednesday.


Compared to the beginning of the year, the coin's price has surged by 350 percent, bringing its market cap to over $380 billion.

Dogecoin grew by 13,500 percent compared to the beginning of the year to $0.68 Wednesday. Its market cap has broken $88 billion.

The prices remain volatile, skyrocketing one minute and plummeting the next.

For some young people, the risks are part of the charm, according Kim Han-jin an analyst at KTB Investment & Securities.

"Prices soar by hundreds of percent in a matter of days if they are lucky," Kim said.

Prices rose by 107,500 percent in a matter of minutes for the arowana token, a coin newly listed on Korea's Bithumb cryptocurrency exchange last month. 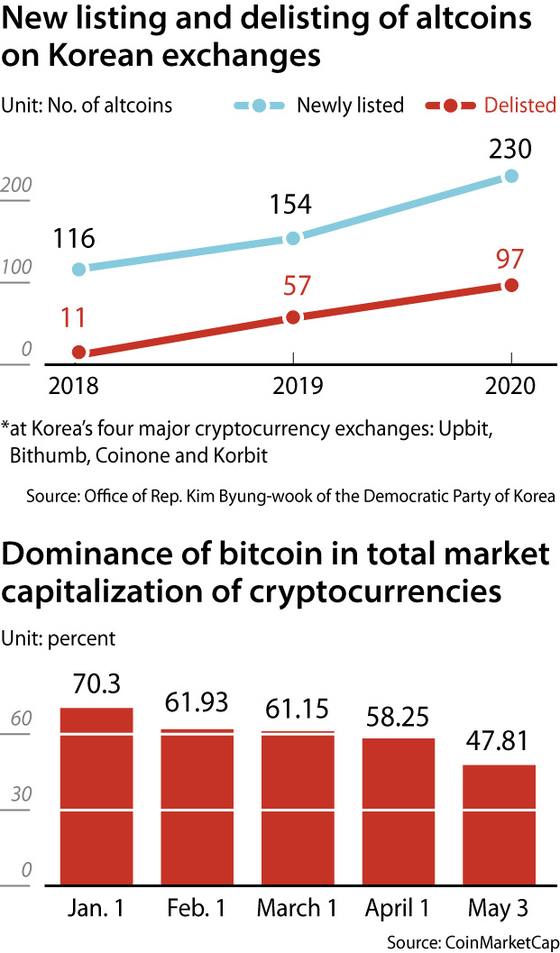 Statistics show investors are moving to altcoins from bitcoin.

Despite the boom in altcoins, many investors don't even know what these coins are for, and often this exposes investors to the risk of delisting.

"Friends I know investing in cryptocurrencies don't even know what kind of coins they are investing in," said Yoon Deok-hee, a 22-year-old university student living in Mapo District, western Seoul.

"To be frank, you don't really need to know," Yoon said. "Investing in coins is much like the odds or evens game we used to play as children."

While many altcoins were designed for certain purposes, such as beating bitcoin on transaction speed, not a lot of investors study the features of each coin when investing like they study stocks.

Some coins were just created as a "joke" like dogecoin based on Shiba Inu dog meme. The coin became famous on tweets supporting the coin by Elon Musk, often described as the "Dogefather" for his interest in the coin.

Ethereum and dogecoin are well known, but there are numerous coins that investors haven't heard names of. And some of these unknown coins often get delisted from exchanges, in which case the losses incurred due to delisting must be eaten by investors.

According to a report released by the office of Rep. Kim Byung-wook of the ruling Democratic Party of Korea, coins newly listed on the country's four major cryptocurrency exchanges -- Upbit, Bithumb, Coinone and Korbit -- doubled from 116 coins in 2018 to 230 coins in 2020.

Over the same period, the number of coins delisted from the exchanges due to problems like false disclosures, increased nine-fold from 11 to 97.

Such an increase in delisting is due largely to lax verification processes at exchanges before listing coins.

As exchanges usually generate their earnings from commissions paid for the trading of coins, its advantageous to have many coins listed.

Currently, coin issuers aren't required by law to disclose the purpose of their coins.

"We are trying our best to assess the coins, but if the [issuers] make up their mind to deceive exchanges from the beginning, it's hard to find it out until it's too late," a source from a local cryptocurrency exchange said on condition of anonymity.

Every time cryptocurrency trading heats up, the Korean government threatened to "close down exchanges" as there is no clear guideline or law to oversee trading at exchanges.

Experts say that the government needs to acknowledge the global trend in investing in crypto assets and focus on making a fair boundary for exchanges, investors and coin developers to take their part in.

For instance, the government can play a part in overseeing what coins are listed on exchanges and make it mandatory for coin developers to disclose important information regarding the coins rather than turning a blind eye and saying it will not get involved as cryptocurrencies don't count as financial assets with intrinsic value.

"An amendment to the Act on Reporting and Using Specified Financial Transaction Information that took into effect in March actually acknowledges cryptocurrencies as assets with value," said Kim Hyoung-joong, head of Korea University's Cryptocurrency Research Center. "Rather than denying the [value of the cryptocurrencies] the government needs to agree with the purpose of the law."

The amendment mandates local exchanges to partner with banks to give real-name accounts to users of exchanges. Currently only the four largest exchanges in Korea have partnered with banks.

In other countries, altcoins are circulated under monitoring and supervision of the country's regulators.

From 2018, the U.S. Securities and Exchange Commission (SEC) has been involved in verifying coins to be listed. If a suspicious coin has been issued, the SEC investigates the coin rather than each private exchange. If there is any illegality involved in the issuance of the coin, the SEC prohibits it from being listed.

It's similar in Japan. From 2017, only coins approved by the government can be listed on cryptocurrency exchanges.

This is in stark contrast to the fact that on average 140 coins are traded on Korea's four major exchanges.