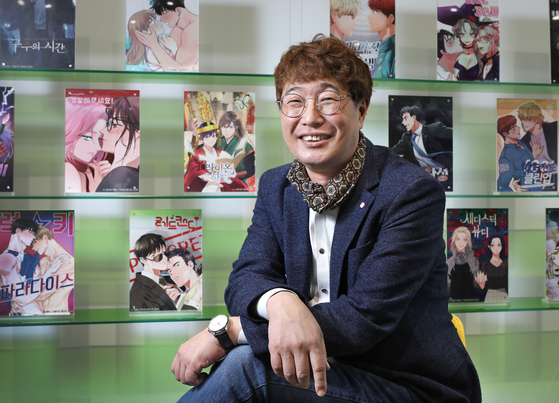 
Kidari Studio, a webtoon and web novel production and platform company, surpassed 10 billion won ($8.9 million) in sales volume last year for the first time in France through its French webtoon platform Delitoon, which it took over in 2019.

The Korean webtoon industry has been expanding overseas so the success may not be a huge surprise, but there’s a very specific reason why Kidari Studio is excelling in the French market. And according to Kim Chun-gon, the Director of Global Platform Headquarters at Kidari Studio, it’s not just because “Korean webtoons are excellent.”

“In 2019, France didn’t have a well-developed public internet service like Korea did,” Kim told the Korea JoongAng Daily. “There was virtually no Wifi on subways or other public transportation, but the French government started expanding its internet services to prepare for the 2024 Paris Olympics. The growth of the webtoon industry subsequently followed.”

Kim, who started his career by establishing and running his own webtoon platform Toptoon, joined Kidari Studio in 2019 and is now in charge of Delitoon’s expansion in the global market as the director at Kidari Studio and the vice president of Delitoon SAS. When he first entered the world of webtoons, Kim was more focused on the business model rather than the content or stories that could be told through this medium.

“I actually wanted to start a game service back then,” he said, reminiscing to when he first founded Toptoon. “I wanted to start something new but the game industry was already over-populated. I didn’t exactly read or like webtoons. I hadn’t done anything related to comics in the past, either. I took a business approach and I thought that because more people were purchasing smartphones that webtoons would be the perfect content for the new technology.”

The service page of Delitoon in France, with the webtoon ″Light and Shadow″ on the main page [LEZHIN ENTERTAINMENT] 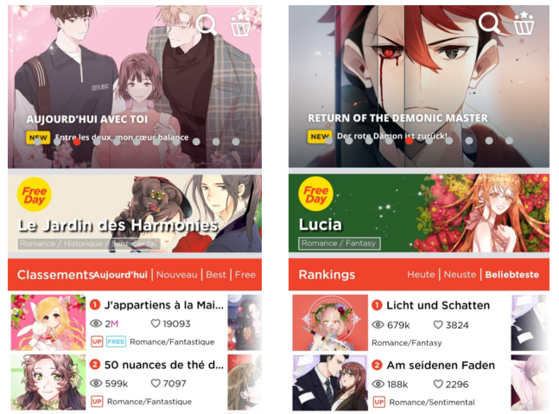 The service pages for Delitoon in French, left, and German [LEZHIN ENTERTAINMENT]


Kim saw that webtoons were the perfect short-format content that would appeal to young people and also required smaller data capacity compared to videos or games. Korea was fast to install Wifi services on public transportation and thus the optimal environment was formed for webtoons whereby their growth trajectory was the same of the smartphone population in Korea.

Another important factor in the success of webtoons is that people consuming the content in foreign countries must have an understanding of what it means to enjoy cultural content as well as the monetary means to buy it as a product. Even before Naver and Daum, Lezhin has employed a system where readers are enticed by the first few episodes and then must pay a small sum of 200 to 300 won per episode afterward. The idea of intellectual property and copyright must also be common among consumers and the European market has all of the above, said Kim.

“Rather than individual countries, we are expanding to all regions that share a language and France and Germany are great examples,” he said. “This year, we plan on launching a Spanish service and next year, we’re aiming for Portuguese and Italian as well [...] Starting a Spanish service means we’re also aiming at Central and South America as well as the Spanish-speaking population in the United States.” 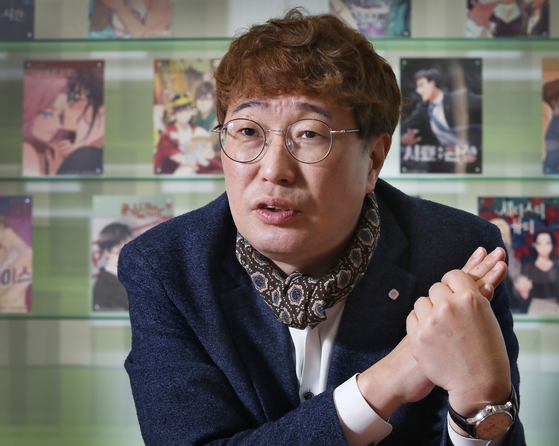 
The absence of the need for webtoons to be printed means that while the same amount of effort is needed to make both an episode of a webtoon and an episode in a comic, the former yields more profit because it can be easily produced, distributed and corrected. And since the size of the smartphone screen is smaller than the width of a comic book, there isn’t enough space to pay attention to details in the background as the character's facial features need to be the main focus. Less attention to details means less time and effort.

“For a drama series or film, the bigger your fantasies means the higher the cost of production,” said Kim. “But for a webtoon, the cost stays the same, while authors are free to travel to the past or the future for their inspiration. That means a more varied pool of stories for readers to choose from.”

But a lowered barrier means that quality control arises as a major issue. Although the company respects the artistic freedom of webtoonists, producers — who mainly act as managers for individual webtoonists — keep a careful lookout for things that could later prove to be problematic. The judgment on what needs to be improved or deleted is strictly based on data, said Kim.

“Since readers can choose to buy individual episodes, the numbers are a clear indicator of whether the work is gaining or losing popularity,” he said. “If we see that a particular episode caused readership to drop off, we try to figure out why. It could be because the drawing was sub-par or maybe the story unraveled too much and readers became bored. Our producers use the data to analyze how a work is doing and that gives the webtoonists certain stress as well.”

He added, jokingly, “We’re happiest on weekends that rain. It’s not always the case, but days that people rest but cannot go outside seem to perform well. Days when new episodes of popular works come out are also good. The day that they finish is the saddest.” 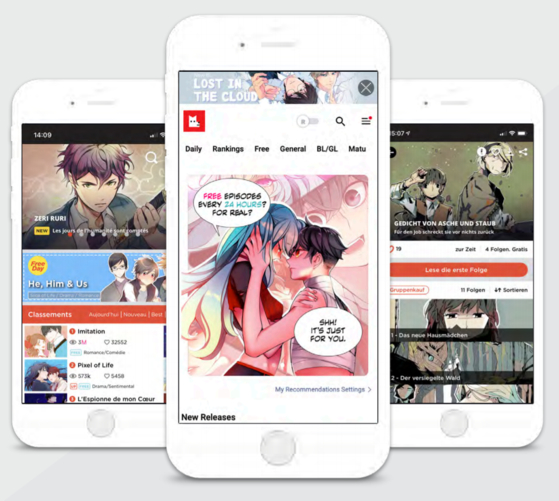 
Another difficulty comes with language; not so much that meaning is lost in translation, but the fact that Latin alphabets take up much more space than Korean. Latin alphabets are laid out one by one whereas Korean is written in blocks. So what could just be written with five letters (or six including one space) has to be written with much more, such as "Light and Shadow" which has 14 letters and takes up 16 spaces.

"The thumbnail images and titles are so important to lure in the readers at first," said Kim. "That makes us think that Korean may actually be the best language to service any content on the internet, but it's up to us bring out the best in the ways we can. A well-made title can have a huge impact and if the whole title doesn't show all at once because it's too long, it actually has an impact on how many people will read it."

Delitoon services 340 webtoons and has 1.83 million users in France as of March 2021. It plans to provide 300 more webtoons by the end of this year. Webtoons may be a relatively new form of content in the global market but Kim believes that Korean webtoons have the power to dominate a market that will have become a staple of digital culture in the future.