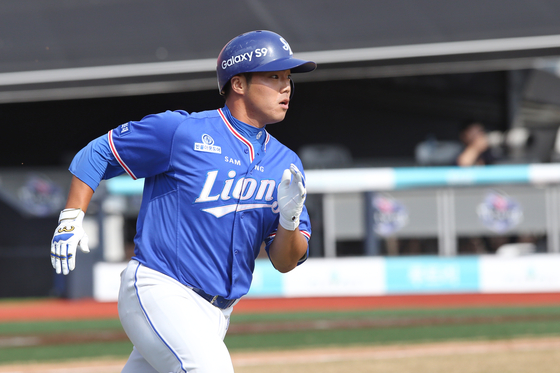 Samsung's Kim Min-su rounds the bases after hitting the first home run of his career in a game against the Lotte Giants at Daegu Samsung Lions Park in Daegu on Friday. [YONHAP]


Heavy pollution covered Korea over the weekend, forcing the KBO to cancel four games on Friday and the rescheduled matchups on Saturday. Despite the interruptions, all five series were completed with doubleheaders after skies cleared on Sunday.

Games between the Hanwha Eagles and LG Twins in Jamsil, southern Seoul, the Kiwoom Heroes and SSG Landers in Incheon, the NC Dinos and KT Wiz in Suwon and the Doosan Bears and Kia Tigers in Gwangju were all postponed on Friday because of high levels of both fine and ultrafine dust.

Friday's cancellations mark the first time four games have been postponed in one day since the KBO began to stop play because of pollution levels in 2018.

Only the Lotte Giants and the Samsung Lions in Daegu were able to play their Friday, Saturday and Sunday games as planned.

The Bears were the only team to get a sweep over the weekend, beating the Tigers: 11-5, 5-3, 9-0. Elsewhere in the league, the Twins, Landers, Lions and Dinos all won their respective series two games to one.

The weekend winners suggest that the KBO is settling down into some sort of order, with all five winners ranked in the top five going into the weekend.

Only the Wiz, who were tied for second going into the weekend, lost their series, falling to third alongside the Bears and Landers.

While the Bears picked up the weekend's only sweep, the matchup between the Giants and the Lions made the most headlines. 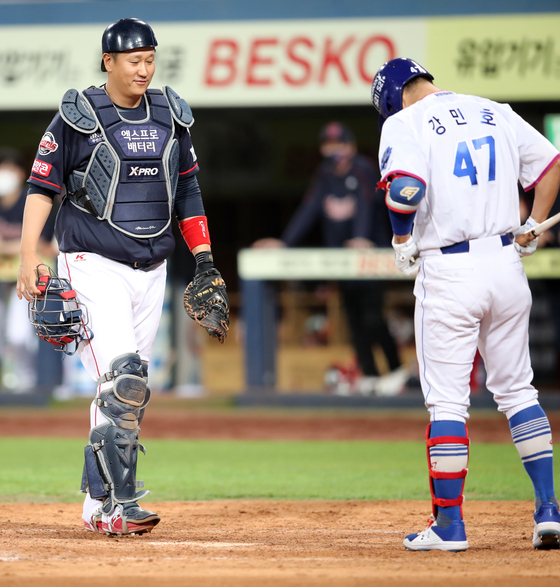 Lee Dae-ho of the Lotte Giants debuts as catcher in the ninth inning against the Samsung Lions at Daegu Samsung Lions Park in Daegu on Saturday. [NEWS1]


Giants designated hitter Lee Dae-ho made history on Saturday as the oldest person to ever debut as a catcher in the KBO. The Giants were up 9-8 at the bottom of the ninth inning, but had exhausted all of their catchers as pinch hitters earlier in the inning. Lee stepped up to the plate, or at least behind it, in ill-fitting pads, to help the Lotte club lock down the win.

Lee's first appearance as a catcher came more than 20 years after his debut in April 2001, making him by far the oldest person to start a catching career, albeit a short-lived one, in the KBO, at 38. The former major leaguer didn't do a bad job, successfully fielding the ball and ending the game without any issues.

Samsung also had reason to celebrate, as 30-year-old catcher Kim Min-su hit the first home run of his career on Friday. Kim's big fly came in his 112th game in the KBO — remarkably, his second career home run came just a couple of days later on Sunday.

Sunday also the KBO's first brother vs. brother starting pitcher clash, as the Landers started Kim Jeong-bin and the Heroes fielded his younger brother Kim Jeong-in. Neither brother pitched more than four innings, and SSG walked away with the win.

The KBO returns on Tuesday as the Heroes take on the Bears at Jamsil, the Landers face the Giants in Busan, the Lions visit the Wiz in Suwon, the Twins play the Tigers in Gwangju and the Dinos head to Daejeon to face the Eagles.