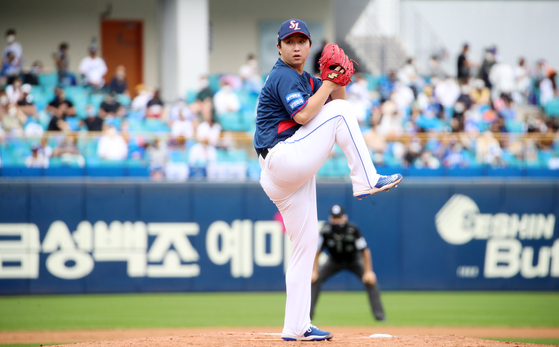 
The KT Wiz hold on to a comfortable lead at the top of the KBO after another week of action, but with less than a month left to play, both the second-place Samsung Lions and the fourth-place Doosan Bears are making a last-minute push for the top of the table.


KT's lead was narrowed slightly over the weekend, when they tied one and lost one with the third-place LG Twins, who sit 5.5 games behind the Wiz.

The Samsung Lions took the opportunity to narrow the gap, winning both games against the NC Dinos — 1-0, 1-0 — to edge a little closer to the Wiz. The Lions are on track to return to the postseason for the first time since 2015. The Daegu club dominated the KBO for the best part of two decades, reaching the playoffs every year bar one from 1997 to 2015. This year the team is on track to get a shot at that former glory.

The big surprise in the top four is the sudden arrival of the Bears. Two weeks ago, the Seoul club were back in seventh place after a fairly disappointing season following the departure of a series of big name free agents over the offseason. As the fall began, Doosan suddenly picked up the pace, jumping three teams to take fourth place with a fighting chance of climbing even higher.

The Bears snapped a seven-game winning streak on Saturday, losing 5-1 to the 10th-place Hanwha Eagles, but bounced back for a 5-3 win on Sunday. With 30 games left to play, the Bears trail 3.5 games behind the Twins and give games behind the Lions.

The fifth-place Kiwoom Heroes, sixth-place SSG Landers and seventh-place NC Dinos are all struggling. The Heroes and Landers have each won only three of the last 10 games, with the Heroes splitting their weekend series with the eighth-place Lotte Giants and the Landers dropping both games to the ninth-place Kia Tigers.

For the Dinos, things are looking even worse. The KBO's reigning champions have dropped eight games in a row to tumble from fourth to seventh place in a single week, with just two games now separating them from the Giants.

The KBO will continue playing three two-game series until the end of the season. The hottest ticket this week sees the Bears head to Suwon to take on the Wiz, a series that could seriously narrow the gap at the top of the table.

Elsewhere in the KBO, the Giants will head to Seoul to take on the Twins, the Landers take on the Lions in Daegu, the Tigers face the Dinos in Changwon, South Gyeongsang, and the Heroes and the Eagles face off in Daejeon.