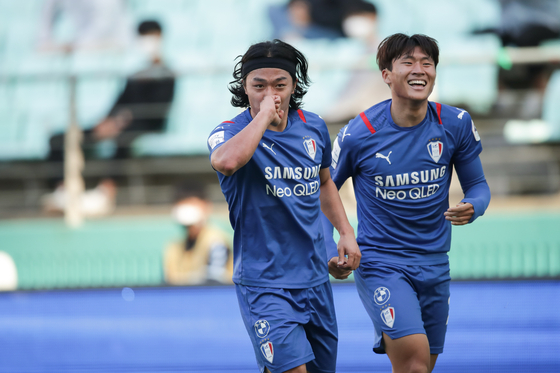 Ko Seung-beom, left, of the Suwon Samsung Bluewings celebrates after opening the scoring in a match against the Jeonbuk Hyundai Motors at the Jeonju World Cup Stadium on Sunday. [ILGAN SPORTS]

The K League 1 was missing two matches this week — one between FC Seoul and Gwangju FC and one between Seongnam FC and Ulsan Hyundai — after Seoul announced on May 3 that defender Hwang Hyun-soo had tested positive for Covid-19 after appearing as a substitute in a game against Seongnam on April 30.

All Seongnam and Seoul players are currently in self isolation.

From the four matches that were played over the weekend, Suwon FC, Daegu FC and the Bluewings were able to pick up three points.

In Jeonju, it was a quiet first half of the game between Jeonbuk and the Bluewings as both teams were unable to find the back of net until the 62nd minute, when the Bluewings’ Ko Seung-beom opened the scoring.

Once the floodgates were open, the Bluewings piled on, scoring two more goals over the following nine minutes to take the score to 3-0.

Jeonbuk had 12 shots and 5 on target in the game, as opposed to the Bluewing’s 7 shots and 4 on target, but failed to convert.

Jeonbuk’s Stanislav Iljutcenko added a goal in the 90th minute of the game, but was unable to repair the damage and Jeonbuk had to take their first loss of the season.

Jeonbuk stays at first, while the Bluewings climbed up to fourth on the K league 1 table.

It was a good day for the people of Suwon, as Suwon FC also won 3-1 against Jeju United on Saturday at Jeju World Cup Stadium.

The Pohang Steelers and Gangwon FC had to settle with a draw at Pohang Steel Yard Stadium in Pohang, North Gyeongsang on Saturday.

The K League 1 continues this week without Seoul and Seongnam. The midweek fixtures will see Incheon face the Steelers and Suwon face Gwangju on Tuesday, and the Bluewings take on Jeju and Gangwon play Ulsan on Wednesday.