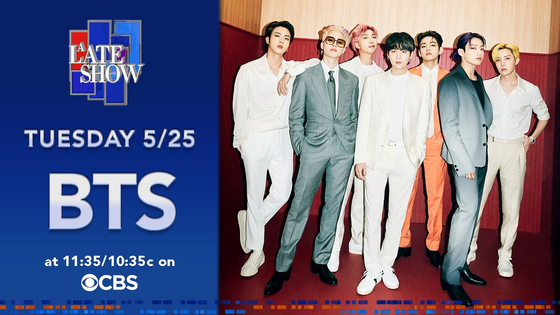 BTS will be returning to ″The Late Show with Stephen Colbert” on May 25. [SCREEN CAPTURE]


K-pop boy band BTS will be making a return to “The Late Show with Stephen Colbert” on May 25.

The news was announced on the show’s Twitter account on Friday. It hinted that the group would be performing on the show, perhaps their new English-language single “Butter,” which is scheduled to drop at 1 p.m. today.

BTS previously appeared on the CBS’s late-night comedy talk show in May 2019 by visiting the Ed Sullivan Theater in New York in person and staged a live performance of “Boys With Luv.” During one segment of the show, BTS members appeared dressed up as the Beatles, while Colbert put himself in an Ed Sullivan costume. Their upcoming appearance is expected to take place virtually.