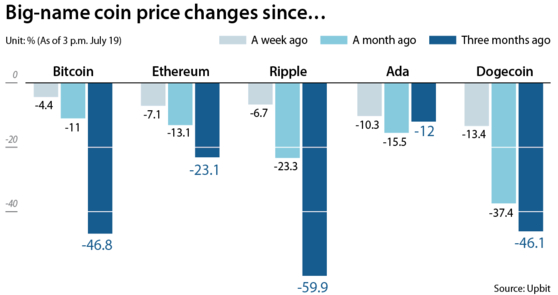 Cryptocurrencies are no longer booming in Korea.

According to Upbit, the country’s largest cryptocurrency exchange by trading volume, of its 102 listed coins, 100 declined in price over the past three months as of 3 p.m. Monday.

Only two coins have increased in price during the period: Axie Infinity, up 83.76 percent, and ethereum classic, up 13.85 percent.

Ethereum slid 23.1 percent as it dodged a bullet with the recent growing popularity of non-fungible tokens (NFT). NFTs are held on the Ethereum blockchain.

Trading volume has collapsed with prices.

That’s less than one tenth of the 46.1 trillion won when volume peaked on May 5.

The average daily trading volume of the four exchanges during the January-to-April period was about 14.24 trillion won. It was very close to the daily volume of Kospi stock in April, which was about 15.7 trillion won.

The situation is no different on global cryptocurrency exchanges.

The trading volume of world’s major exchanges, such as Binance, Coinbase, Kraken, Bitstamp, in June plummeted more than 40 percent, according to a report from CNBC.

In online communities, many Korean retail investors are expressing their worries about the future of the cryptocurrency market.

“As the Season 2 of cryptocurrency is coming to an end, we should wait for the Season 3," read a post.

The first crypto boom was between 2017 through January 2018. The next seems to be coming to an end.

Cryptocurrencies are still higher than they were at the beginning of the year. There are only 11 coins that are trading at lower prices now compared to January, according to data from Upbit.

Bitcoin, which traded at about 32 million won in the beginning of the year, was trading at about 37.5 million won per coin as of 3 p.m. Monday.