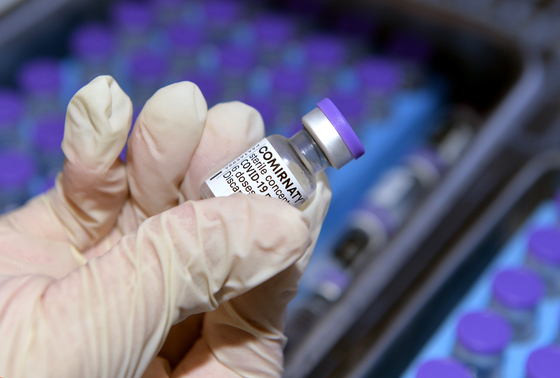 A vial of the Pfizer Covid-19 vaccine. [KIM SUNG-TAE]


Health authorities on Monday acknowledged for the first time that a Pfizer Covid-19 vaccine was the cause of death for healthy soldier in his 20s who died last month after receiving the shot.

Korea’s Covid-19 Vaccination Damage Investigation Team said Monday the death of a soldier in his 20s was found to be due to myocarditis, or a type of heart inflammation, related to his Pfizer inoculation.

The man, who received his first Pfizer shot on June 7, suffered cardiac arrest and died six days after receiving the vaccine. He did not have any underlying health issues.

Military and health authorities carried out an autopsy and later confirmed that myocarditis was found in areas throughout the victim’s heart.

The United States’ Centers for Disease Control and Prevention (CDC) has also previously announced that cases of inflammation of the heart or its lining — called myocarditis and pericarditis — have been reported after mRNA vaccines like Pfizer or Moderna, particularly in male adolescents and young adults.

Symptoms include chest pain, shortness of breath, and a fast-beating, fluttering, or pounding heart, the CDC said.

This marks the second time Korea admitted a death was related to vaccination since its vaccination campaign began in February.

The first acknowledged vaccine-related death was of a man in his 30s who was administered the AstraZeneca vaccine and died of unusual blood clots with low blood platelets — termed thrombosis with thrombocytopenia syndrome, or TTS.

In another case of a vaccine acknowledged to have caused a serious, though not lethal, side effect on Monday was a man in his 20s who developed pericarditis after getting the second dose of the Pfizer vaccine, but recovered later.

According to health authorities, the man suffered from chest pain 11 hours after getting his second Pfizer dose on June 29, and was diagnosed with pericarditis. He also did not have any underlying health problems.

After examining the medical records and consulting with experts, health authorities acknowledged the causal link between the man's Pfizer vaccine and his heart inflammation.

Another case of an acknowledged vaccine-related side effect was from a woman in her 70s who developed TTS nine days after getting her first shot of AstraZeneca on June 10.

TTS is considered rare, but occurs more often in vaccinated women between 18 and 49 years old, which is why Korea raised the age limit for the AstraZeneca vaccine to those 50 and older.

According to health authorities, the victim, who is now recovering, is a diabetes patient.

The woman suffered from swelling and pain in her calves nine days after her first dose of AstraZeneca. She was first diagnosed with deep vein thrombosis, which was later confirmed to be TTS.