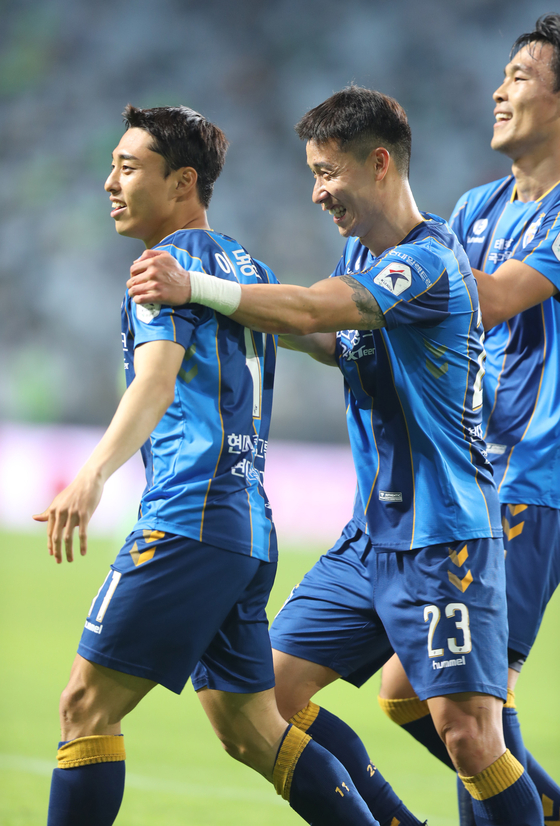 Lee Dong-jun of Ulsan Hyundai, left, celebrates with his team after scoring the fourth goal against the Jeonbuk Hyundai Motors on Wednesday at Jeonju World Cup Stadium in Jeonju, North Jeolla. [YONHAP]


The mighty have fallen, as Jeonbuk Hyundai Motors drop to third place in the K league 1 table after taking two losses this week, with not only Ulsan Hyundai but also the Samsung Bluewings leapfrogging the long-term leader to take the top spots in the table.

Jeonbuk, who have held onto the K league 1 title for four consecutive years, added two more losses this week against the Bluewings and Ulsan, falling to third place for the first time in eight years.

The last few weeks have suggested the demise of the Jeonbuk dominance, as the Bluewings snapped Jeonbuk’s 13-game undefeated streak.

Jeonbuk haven't been able to add a win since then, and Ulsan, who were always stuck at second place, have now taken the top of the table for the first time.

As Han Kyo-won scored two goals for Jeonbuk in the first 26 minutes, Ulsan was behind 2-1 until the 35th minute when Lukas Hinterseer netted an equalizer and started the goal rush. 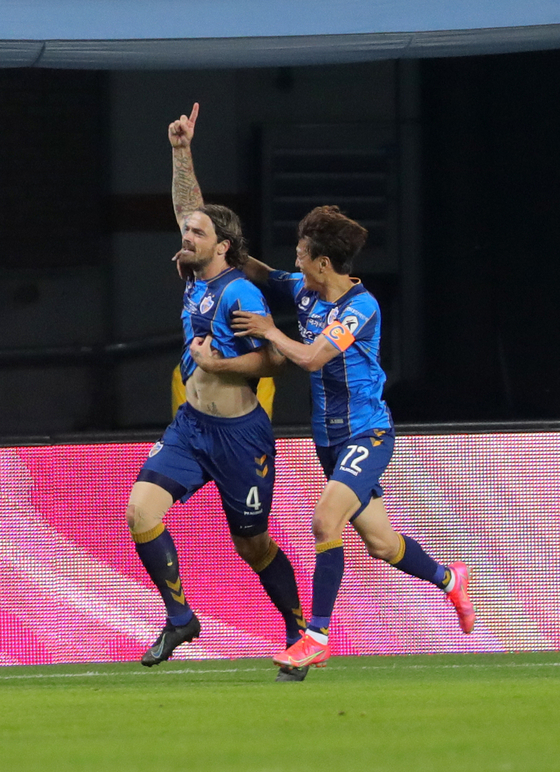 Dave Bulthuis of Ulsan Hyundai, left, celebrates after meeting the net in the 56th minute at a game against Jeonbuk Hyundai Motors on Wednesday at the Jeonju World Cup Stadium in Jeonju. [NEWS1]


Dave Bulthuis slotted in a goal in the 56th minute and Lee Dong-jun added the fourth for Ulsan in the 75th, just one minute after coming on as a substitute.

Ulsan has pulled off two wins this week to take first, winning 1-0 against the Pohang Steelers on Saturday at Ulsan Munsu Football Stadium in Ulsan. The Steelers are at fifth on the table.

Jeonbuk, on the other hand, added another loss on Sunday, losing 1-0 to Daegu FC at DGB Daegu Bank Park in Daegu.

This is the first time in eight years that Jeonbuk has taken three losses in a row. The last time was in 2013, when Jeonbuk lost to Ulsan, the Steelers and FC Seoul.

It has been nine years since Jeonbuk has gone without a win for six consecutive games. Jeonbuk now sits at third place but if they don’t get their head back in the game, they may be looking at a further demotion.

On the other hand, Daegu continues its undefeated streak of eight games, tying with the Bluewings and beating Jeonbuk. Daegu sits at fourth place on the table.

The Bluewings are on their own undefeated streak of seven games, adding a 4-3 win against Gwangju FC on Sunday at Gwangju Football Stadium in Gwangju. The Bluewings sit at second on the table. 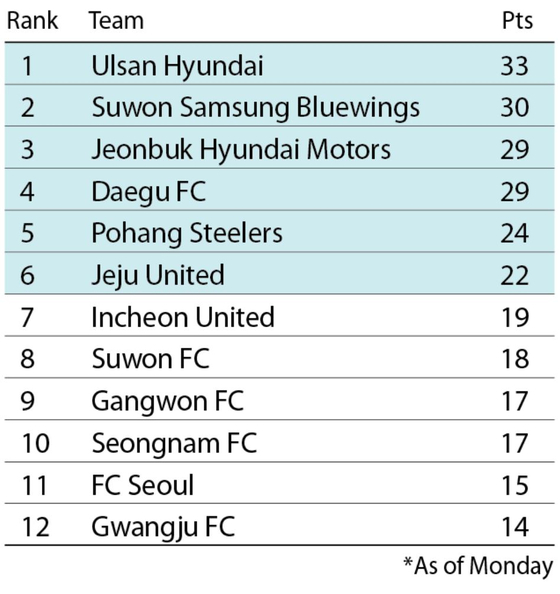