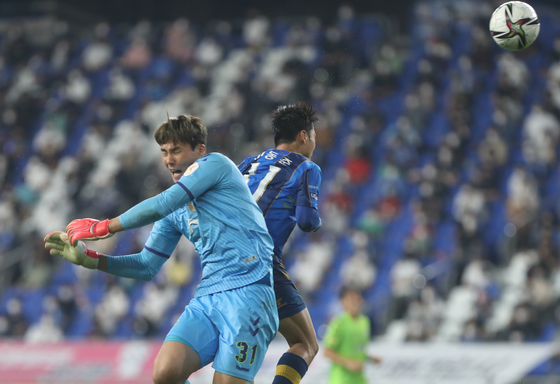 The best of the best were on the starting lineup for the big showdown on Friday, as Jo Hyeon-woo, who is frequently called up to the national team, came on as goalkeeper for Ulsan alongside Lee Dong-jun and Lee Dong-gyeong, who both played at the 2020 Tokyo Olympics.

Jeonbuk had U-23 Olympic team goalkeeper Song Bum-keun on their side with Lee Yong, who played for the senior national squad against Lebanon in the third round of Asian qualifiers for the 2022 Qatar World cup on the bench.

But despite all that firepower, not a lot really happened.

The two sides played to a stalemate in the first half, with the game turning much more physical after they swapped ends. The only real danger came in the 86th minute, when Lee Dong-jun’s header almost made it into the goal. Jeonbuk’s Hong Jung-ho flung himself back to kick the ball away, saving his club from a big loss.

On the same day, Daegu FC beat the Pohang Steelers 2-1 at Pohang Steel Yard in Pohang, North Gyeongsang. On Saturday, Jeju United defeated Incheon United 2-1 at Incheon Football Stadium in Incheon. On Sunday, Suwon FC found a 1-0 win against Gangwon FC at Suwon World Cup Stadium, with the other four teams ending up with draws. The Suwon Samsung Bluewings drew 2-2 against Gwangju FC and Seongnam FC drew 1-1 against FC Seoul.

The K League will continue this weekend as Jeonbuk plays their 30th match this season against the Bluewings at Jeonju World Cup Stadium in Jeonju, North Jeolla on Saturday, while Gwangju take on Jeju, Gangwon face Pohang and Daegu play Ulsan. On Sunday, Incheon will take on Seongnam while FC Seoul try their luck against Suwon.

France, Argentina both add 3 points, France locks in for last 16