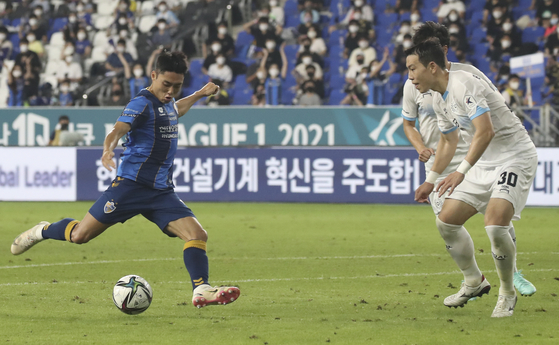 
Ulsan Hyundai had a good week in the K League 1, defeating Daegu FC and Gangwon FC to strengthen their lead at the top of the table.

In the match against Daegu on Wednesday, Lee Dong-gyeong and Won Du-jae rejoined the starting 11 after the Tokyo Olympics, with Lee Dong-jun and Seol Young-woo also returning to the squad as substitutes in the second half. Daegu also had two Olympic returnees play, Jeong Tae-wook and Kim Jae-woo, with Jeong Seung-won sitting out the game.

Lukas Hinterseer of Ulsan opened the scoring from the penalty spot, but Daegu quickly bounced back with Jeong Tae-wook scoring the equalizer in the 45th minute. Lee Dong-jun gave Ulsan the lead, slotting in the winning goal with 14 minutes left on the clock.

In Ulsan’s match against Gangwon FC on Saturday, Olympians Lee Dong-gyeong and Lee Dong-jun seemed to be showing off some tricks they'd picked up on the big stage.

Lee Dong-gyeong opened the scoring toward the end of the first half, but Cho Jae-wan of Gangwon scored the equalizer with 12 minutes on the clock. Lee Dong-jun’s chance came minutes after, finding the back of the net with Lee Chong-yong’s assist.

Jeonbuk Hyundai Motors lost 1-0 to Suwon FC on Wednesday, playing without Olympic returnees Lee You-hyeon and Song Bum-keun. The two did rejoin the club on Sunday for a 2-1 win over Daegu.

Ulsan tops the table for now, having played three more games than Jeonbuk.

Elsewhere in the league, the Pohang Steelers defeated Seongnam FC 1-0, the Suwon Samsung Bluewings tied 0-0 with Jeju United, Seongnam came back with a 1-0 win against the Steelers, FC Seoul defeated Gwangju FC 1-0 and Incheon United tied 0-0 with Suwon FC. 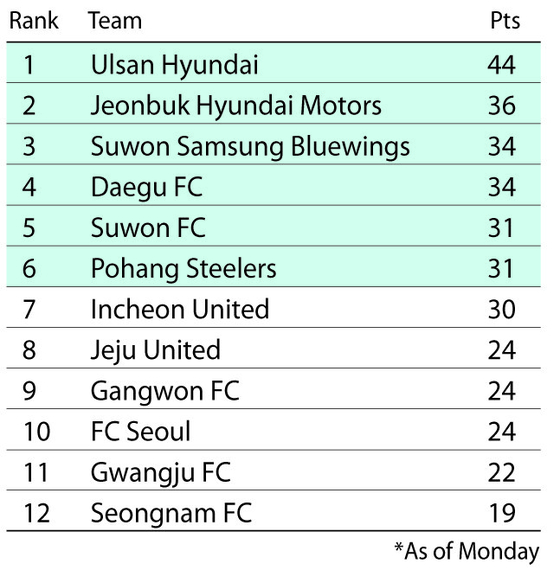 The K League will continue on Wednesday, when Jeonbuk face Gwangju at 7 p.m. at Jeonju World Cup Stadium in Jeonju, North Jeolla.