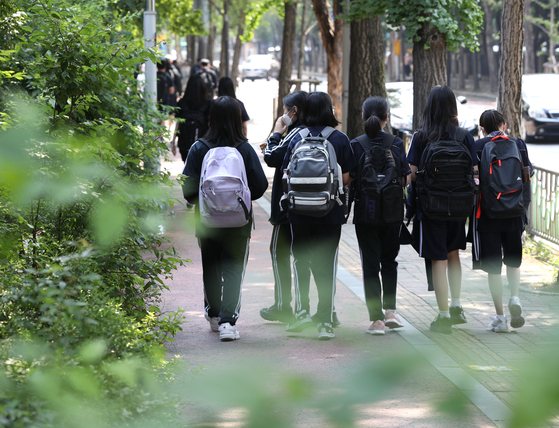 Students on their way home after taking classes at a middle school in Seoul on Wednesday. The Ministry of Education announced that it will raise schools’ attendance cap from one-third to two-thirds under social distancing Level 2 in order to allow more middle schoolers to attend school in person. [NEWS1]


Starting from June 14, middle school students in the Seoul metropolitan area will go to school more often, as the government raised the attendance cap for schools from one-third to two-thirds under social distancing Level 2.

This comes as the Education Ministry pushes for full school attendance, after a study from the ministry showed that Korean students' academic performance dropped as they attended classes online amid the pandemic.

On Wednesday, the Education Ministry announced that they will raise the attendance cap for schools across the board from one-third to two-thirds under social distancing Level 2.

The change will have the biggest impact on students at middle schools.

Currently under social distancing Level 2, first and second graders at elementary schools are excluded from the capacity limit, and high school students are already allowed up to two-thirds capacity.

As such, the school attendance rate of elementary and high schools in the Seoul metropolitan area recorded 67.7 percent and 67.2 percent, respectively, while that of middle schools stood only at 48.3 percent.

Students at vocational high schools will also be able to go to school every day under Level 2, addressing concerns raised that field-training is difficult to be substituted by online classes.

The Education Ministry explained that the gradual reopening of schools is a process that requires checking the health measures at schools and creating an environment to which students and parents can adapt.

The minister stressed the need for full-scale in-person schooling in the second semester, following findings that Korean students' overall academic performance had dropped during the pandemic.

On Wednesday, the ministry published the "2020 National Assessment of Educational Achievement" on students in Korean, mathematics and English for around 3 percent of Korea’s third-year middle schoolers and those in their second year in high school.

According to the assessment, the percentage of average and above-average scores in Korean language among the middle schoolers fell by 7.5 percentage points, to 75.4 percent last year from 82.9 percent in 2019.

Among the second-year high schoolers, the figure in Korean language also fell by 7.7 percentage points, to 69.8 percent from 72.6 percent.

Of particular interest, this is the first time to have this many students score below the average academic level for both groups in the three subjects since 2017.

This is the first official statistical report by the Education Ministry that shows students’ academic achievements have dropped due to the coronavirus pandemic.

The satisfaction, confidence, interest and desire for learning also declined compared to the previous year, the ministry added.

Some voiced concerns about the reopening of schools as infections at schools continue.

Thirty-four students and two parents have tested positive tied to a virus infection which recently broke out at a high school in Gangbuk District, northern Seoul, as of Wednesday.

The minister, however, pushed the initiative saying the infection clusters will not affect the plan.

"We will analyze [the school infection cases] and share the results at the schools,” Yoo said.

The ministry also announced that it will speed up vaccinations for teachers and third-year high schoolers.

"We are discussing with health authorities completing vaccinations for all faculty members by summer vacation," Yoo said. "We are also pushing for third-year high schoolers and College Scholastic Ability Test [CSAT] takers to get their shots by then."