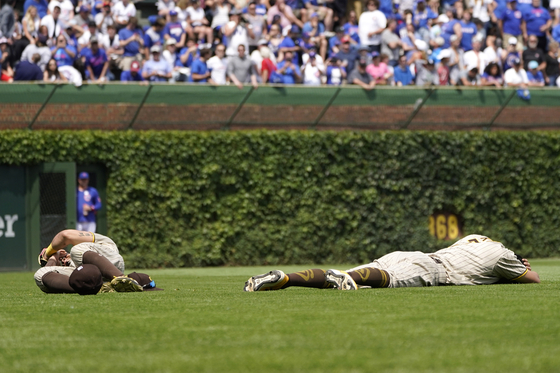 San Diego Padres' Tommy Pham, left, and Kim Ha-seong lay in left field after colliding going after a fly ball hit by Chicago Cubs' P.J. Higgins in the fourth inning of a game at Wrigley Field in Chicago on Wednesday. [AP/YONHAP]


Kim Ha-seong of the San Diego Padres collided with teammate Tommy Pham while chasing a flyball during a match against the Chicago Cubs at Wrigley Field in Chicago on Wednesday, leaving both players with injuries that took them out of the game.

Despite the nasty collision, Kim did manage to get the ball into the infield to trigger an inning-ending double play.

The incident happened at the bottom of the fourth inning, with one out and the bases loaded. Chicago's P.J. Higgins hit a fly ball to left field that looked like it would split the gap between Kim and Pham. Both players sprinted after the blooper, but neither stopped tracking it and they ended up caught in an ugly collision.

As the two collided head first, Kim appeared to catch the ball before dropping it in the confusion. While Pham stayed down, Kim was able to pop back up long enough to throw the ball into the infield, before going down himself. Both players left the field injured, with Pham requiring stitches below his jaw and Kim on concussion watch.

Pham later confronted Kim in the dugout, apparently angry about the failed communication.

"Let me be clear on this, we have a passionate group," Padres manager Jayce Tingler said. "And passion is a good thing. At times, things are going to get heated."

Tingler blamed the accident on a breakdown in communication due to how loud it was in the stadium.

Despite the injuries, the play benefitted the Padres. The Cubs froze on the bases, believing the ball had been caught, and were easily picked off for a double play when Kim threw the ball back in.