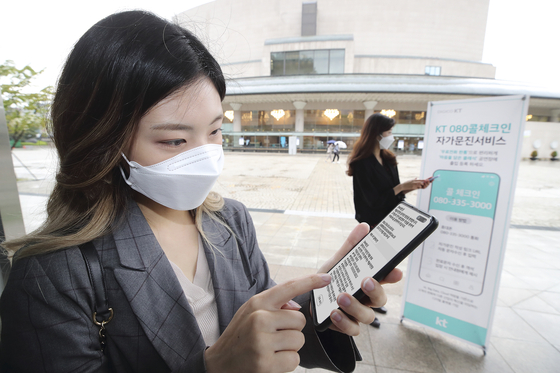 As the pandemic lingers, collecting personal details at public establishments is becoming a business in its own right.

The pandemic requires visitors to provide personal details, like name, phone number and home address, at restaurants and bars. But jotting these down on paper logs raises privacy concerns.

Big tech is offering solutions, with KT, Kakao and Naver rolling out technology to track and trace people out and about in Korea.

KT on June 7 introduced a call check-in service, which allows people to call instead of using (QR) code-based entry logs. They just have to dial an 080 number.

Then they will receive a URL via text message that connects to health self-examination form.

The company has tested the service at its headquarters in Seongnam, Gyeonggi and at the Seoul Arts Center in Seocho District, southern Seoul.

“We found that people are highly satisfied with the service as they do not have to wait in a queue for the entry logs, as well as with the convenient self-examination process,” said Myeong Je-hun, director of KT’s enterprise sector. “We introduced the service to maximize customer convenience in many locations such as concert halls, big hospitals, and test centers.”

In March, Kakao came up with a service that allows people to have their own QR code by just shaking their phones. All they have to do is open the KakaoTalk app and shake the phone two times, then a QR code will show up on the device automatically. 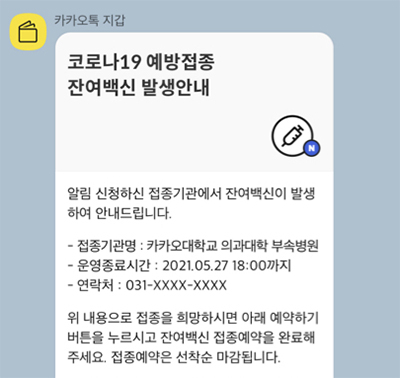 A KakaoTalk message that notifies user that a leftover vaccine is available for reservation. [KAKAO]

The service can be enabled in KakaoTalk app settings.

Kakao recently upgraded the system, and offers a personal code — a combination of numbers and hangul — with the QR code. People can use the personal codes when they are required to leave handwritten entry logs in small-sized businesses like restaurants and locations that do not have machines that can verify QR codes.

With the personal code, there’s no need to leave personal information on a sheet of paper.

Naver in April upgraded its QR check-in service. People now are able to find the "Na" button on the top right corner of Naver's app, and it offers various services including QR codes and payment methods.

Naver also allows people who own an Apple Watch to have their QR code on the device without having to touch their smartphones.

Pass, an identity verification service offered to users of all three mobile carriers - SK Telecom, KT and LG U+ - may upgrade its QR code service.

“We plan to improve the system to enhance user convenience,” said a spokesperson for Pass.

Check in checks out