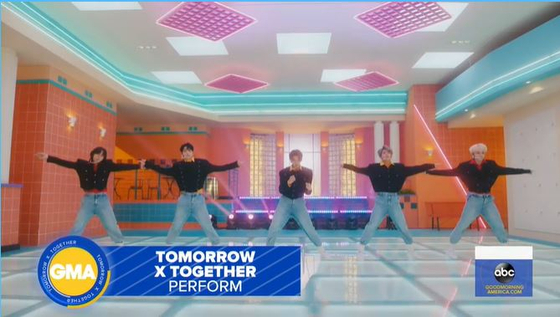 
Tomorrow X Together took to the stage on the U.S. television program, “Good Morning America” on June 10, local time, to premiere its performance of “Magic,” the boy band’s first English-language song.

The American morning show introduced Tomorrow X Together, which is another hit boy band managed by BTS’s agency Big Hit Music, as a “K-pop sensation,” and also conducted an online live interview in English, in which they explained why they always shout out “One! Dream!" as the meaning behind Tomorrow X Together is, "You and I come together in one dream."

“'Magic’ is a perfect song for the summer,” said member Taehyun.

“I hope you guys can dance and clap along.”

The members also talked about their latest release “The Chaos Chapter: Freeze,” the band’s second regular album that dropped on May 31.

Scenes from the music video of "Magic," released on Friday. [BIG HIT MUSIC]


The music video of "Magic" was released on Friday afternoon.