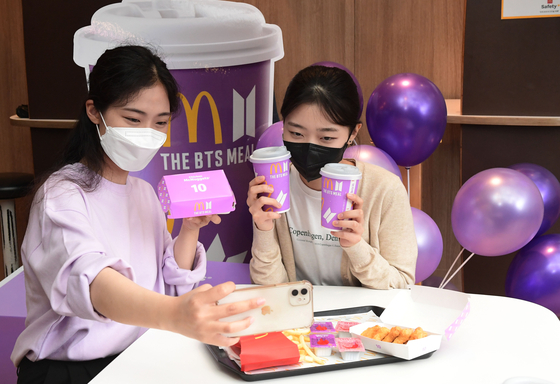 Customers pose with the BTS Meal at McDonald’s. [MCDONALD’S KOREA]


McDonald's BTS Meals are such a sensation that some people are wiping grease off the paper packaging and selling it online.

The set meal branded with the K-pop group's name started selling in the United States on May 26 and in Korea the following day. It is being offered in 50 countries altogether through June 25.

The meal itself, allegedly a favorite of the band members, consists of 10 Chicken McNuggets, a medium Coke, medium fries and two dipping sauces, sweet chilli and Cajun, which were developed in Korea.

That's the perishable part. The imperishibles are the packaging, which includes a paper bag, Chicken McNuggets box, sauce containers and disposable Coke cup. The coloring is purple, a color cherished by BTS fans ever since member V told them in a famous fan club exchange from 2016: "I purple you."

The phrase "I purple you" is printed on the Chicken McNugget box, the Coke cup and the paper bag holding the meal.

The packaging varies slightly from country to country and that has created a market for die-hard BTS fans, who consider it official BTS merchandise that must be part of their collections. Some are collecting the packaging and framing it for posterity. 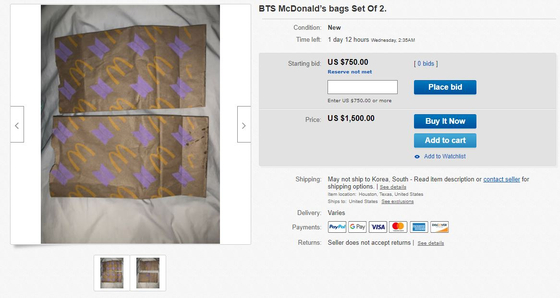 A seller from the United States sells two empty paper bags from the BTS Meal on eBay with bidding starting at $750. [SCREEN CAPTURE]


One enterprising person in the United States is offering two empty paper bags from the American version of the BTS Meal on eBay with bidding starting at $750.

“Both will be vacuum sealed and shipped,” reads the description from the seller.

No one has made a bid yet.

On TikTok, you can watch videos of people washing the grease off BTS meal packaging to ready it for sale.

Other offers on eBay are much lower, with some packaging going for as low as 99 cents.

A seller from Korea managed to sell 37 complete sets of the packaging for $35 each.

“I sterilized them with ultraviolet rays using a baby bottle sterilizer,” read the description from the seller.

High demand for the meals has made them difficult to get in some locations.

In Indonesia, at least 20 McDonald’s outlets were ordered to close temporarily last week after an overwhelming rush for BTS sets, according to a report from Jakarta Globe, which authorities considered a pandemic risk.

McDonald's Korea would not reveal total local sales of BTS meals. But sales of McNuggets jumped 283 percent from May 27 through June 2 compared to the same period in the previous month.

Sales of Oreo McFlurry, which BTS member V apparently is on the record as liking, jumped 45 percent during the same period.