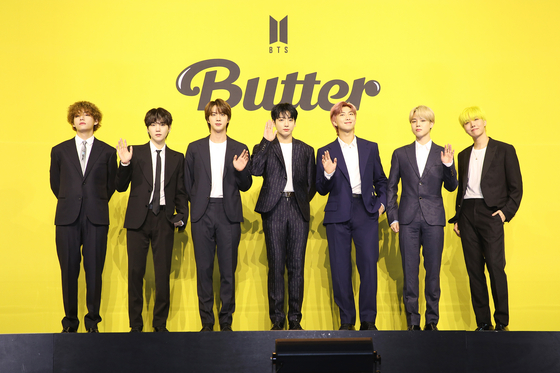 
BTS’s second English-lyric track “Butter” topped the Billboard Hot 100 singles chart for the seventh week in a row, according to Billboard on Monday.

Released on May 21, “Butter” entered the chart at No.1 in the first week of its release and has remained at the top spot ever since.

“Butter” is continuing to smash the boy band’s own record that it set with its first English-lyric track “Dynamite" (2020) which topped the chart for three weeks, not consecutively.

The song is also the eighth song in Billboard history to enter the Hot 100 singles chart at No. 1 and then remain in the No. 1 for seven consecutive weeks and the second song for a group act since “One Sweet Day” (1995) by American singer Mariah Carey and R&B group Boyz II Men, which topped the chart for 16 weeks in a row.

BTS is now close to breaking this year’s Billboard record set by American singer Olivia Rodrigo with her song “Drivers License” (2021), which stayed at No. 1 for eight consecutive weeks earlier this year.

This week’s record is especially noteworthy considering that BTS did not release any new remixed versions or physical albums of “Butter” over the last week, yet maintained a high volume of downloads enough to stay at No. 1. The number of streams also declined by only one percent compared to the previous week.

Remixed versions of “Butter” were released between late May and early June, and a physical album featuring “Butter” was released on June 9. The album also features BTS’s new track “Permission to Dance” featuring British singer Ed Sheeran, but the song will be reflected on the Hot 100 singles chart starting from next week.

If “Permission to Dance” replaces “Butter” on the chart’s No. 1 spot, which is highly likely based on BTS’s past releases, it will set another record of two BTS songs topping the chart back to back.