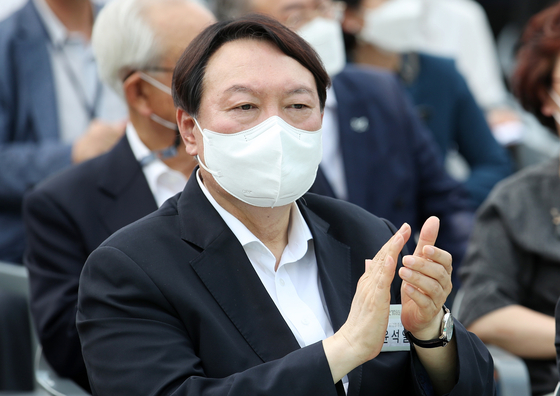 
In a move interpreted by many as a step toward preparing his yet-unannounced presidential candidacy, former Prosecutor General Yoon Seok-youl will open a communications office in Yeouido, western Seoul, in the heart of Korea's political and legislative process, according to a source close to Yoon on Monday.

Opening a communications office is a standard step in presidential campaigns, but such decisions from Yoon's camp are being closely watched because he has yet to join a major political party or formally launch his bid for the presidency.

"People's expectations for the PPP's leadership contest ran high. I have a lot of interest and hopes [in the PPP contest]," Yoon said through a statement delivered by Lee.

However, Yoon did not outwardly state he would join the PPP, adding in his statement, “I can only say that I will follow the direction pointed out by the people. All choices remain open, and nothing is decided.”

Although Yoon’s statements indicate little change from his responses to reporters’ questions when he attended the opening ceremony of the Woodang Memorial Hall last Wednesday, his hiring of a spokesman and the opening of a communications office have heightened expectations that a presidential bid is forthcoming.

A poll released Monday showed Yoon Seok-youl leading public opinion among all potential candidates in next year’s presidential election. According to a two-day survey of 1,700 people aged 18 or older nationwide conducted by the Korea Society Opinion Institute (KSOI) from Friday to Sunday, Yoon ranked first at 35.5 percent, up 4.4 percentage points from the previous week. The poll had a confidence level of 95 percent and a 3.1 percentage-point margin of error.

As Yoon’s political machinery began operating, PPP Chairman Lee on Monday said his party would provide a “big tent” for opposition presidential candidates from both inside and outside the party.

“An integration of opposition forces into our party is coming into view,” Lee said during a party leadership meeting. “My vision lies in establishing a big tent that could gather a large number of outstanding presidential candidates from outside the PPP as well as those inside the party to oppose the Moon Jae-in government.”

Lee’s remarks came as the PPP has been considering the idea of accepting presidential hopefuls from outside the party, such as Yoon and Ahn Cheol-soo, leader of the minor conservative People’s Party, to raise its chances of victory in next March's presidential election.

“The PPP leadership has a lot to do in order to achieve a presidential election victory,” Lee said, adding the party's proposed merger with the People’s Party would be one of the PPP's “top priorities.”