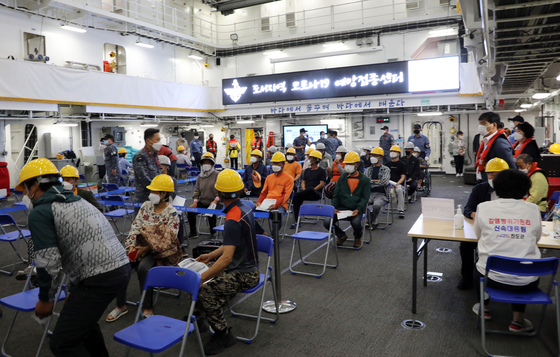 Residents from remote islands wait to receive Janssen's Covid-19 vaccines at a mass vaccination center installed on Korea's first military training vessel, Hansando, off Jin Island, South Jeolla, on Monday. The 4,500-ton Hansando is equipped with the largest medical center and the highest number of sickbeds among the country's warships. [YONHAP]


While the government announced that people vaccinated abroad will no longer have to undergo 14-day quarantines from July, concerns are growing as Britain and India, where the highly contagious Delta variant from India is quickly spreading, have also been granted the exemption.

The government announced Sunday that quarantines will be waived for fully vaccinated people regardless of their citizenship, if entering Korea for a family visit or important business, academic, public interest or humanitarian purposes.

One big exception is for people coming from countries where virus variants are prevalent. Those visitors will still have to quarantine, and the list will be updated every month.

Currently, all passengers coming from India are required to quarantine at a state-run facility for seven days, unlike other arrivals. After testing negative for the virus at the end of the week, they will be required to self-isolate at home for a second week.

Starting in July, however, people coming from countries where the Delta variant is rampant, such as Britain and India, will no longer have to undergo quarantine as long as they have completed vaccinations, raising concerns over possible leakage of the virus variant.

The government explained that it has chosen the list of countries by comprehensively evaluating the rate of virus variants and the situation of confirmed Covid-19 patients in the country.

“For the British [Alpha] variant, we have judged that vaccinations are highly protective against the variant and thus did not designate Britain as a high-risk country,” Sohn Young-rae, a senior official said during a briefing on Sunday.

"We don’t have enough scientific evidence for the Indian [Delta] variant,” Sohn continued. “We will continue to monitor the trends in evaluations overseas and consider [including India] in the list of high-risk countries if a more precise result comes out.”

Experts pointed out that exempting quarantine for countries where the Delta variant is rampant may be a rash decision.

“The government needs to provide exact evidence, or else people will be questioning,” Chon Eun-mi, a professor of respiratory medicine at Ewha Womans University Mokdong Hospital, told the Korea JoongAng Daily.

“The Indian variant is now a dominant strain in Britain, and it isn’t being stopped even in a country with one of the highest vaccination rates,” Chon said.

“The AstraZeneca vaccine is known to be 60 percent effective against the Indian variant, meaning that 40 percent of people can come into the country infected, while many of them are asymptomatic,” Chon added.

"Not much is known about the Indian variant, and it is concerning that those policies are bound to those of the British variant,” said Lee Jae-gab, a professor of infectious disease at Hallym University Kangnam Sacred Heart Hospital.

People wishing to be quarantine-free must submit their application to Korean missions overseas at least a week before departure, authorities said Monday.

"If you turn in your application [to overseas missions] about a week before departure, the issuance of the quarantine exemption will be properly matched with the flight," Lee Sang-hee, an official at the Central Disaster and Safety Countermeasure Headquarters, said.

Lee added that foreign residents in Korea who were vaccinated abroad will not be eligible for quarantine exemption when re-entering the country if they do not have immediate family living in Korea.

On the other hand, foreign residents in Korea who were vaccinated in Korea will not have to undergo quarantine when returning to the country.

For family visits by non-residents, fully vaccinated foreigners will be exempt from quarantine only when visiting their non-Korean national family residing in Korea for long-term stay.

On Monday, Korea saw its new coronavirus cases barely slide into the 300s after 77 days. The lower number may be due to fewer tests conducted over the weekend. 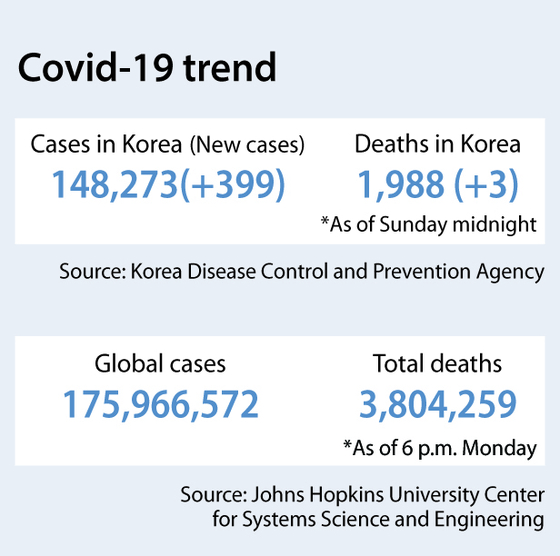 There were three additional virus deaths, raising the total to 1,988.