At some firms, it's a great time to be earning a salary

At some firms, it's a great time to be earning a salary 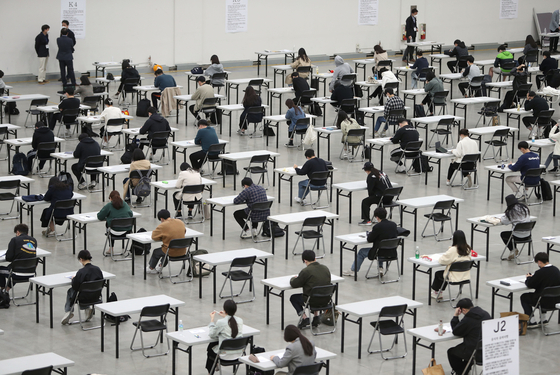 Applicants for jobs at the Daegu Metropolitan Transit Corporation prepare to take a test at Exco, Buk District, Daegu on May 2. [YONHAP]

Pay rises continue at Korea's big companies and IT firms.

SK hynix’s union and management recently agreed on an average pay rise of 8.07 percent for this year. New employees at SK hynix now receive 50.4 million won ($45,100) in starting salaries — and that could rise to 80 million won with profit sharing and productivity incentives.

That’s even more than at Samsung Electronics, but its employees aren't doing badly. In March, management and the union agreed to a 7.5 percent pay raise for 2021. That brings its starting salary to 48 million won from 44.5 million won.

“We see many luxury cars parked in the parking lot of our company,” said a 31-year-old worker at a big semiconductor company in Korea. “For young people, luxury imported vehicles are the No. 1 priority these days after they gave up on buying an apartment [because of the overheated real estate market].

“On company’s chat sites, there are many postings that give tips on how to purchase Mercedes-Benzes at reasonable prices.”

LG Electronics is giving pay raises of 9 percent, the highest in a decade.

Hyundai Motor, the country’s largest automaker, said it is currently reviewing ways to improve its compensation for employees.

Korean IT companies and game developers were the first movers in this wave of big pay raises.

In early February, game companies Nexon and Netmarble announced they would raise salaries of all employees by 8 million won.

On Feb. 25, Krafton CEO Kim Chang-han said the company would raise salaries for developers by 20 million won. Krafton is known for its online game PlayerUnknown's Battlegrounds.

E-commerce companies like Coupang, Baedal Minjok and Zigbang are scrambling to offer good packages to find a talent.

But some feel like they're being run over by this bandwagon. Mid-sized and small companies don't know how to keep their employees from bailing out. Big raises are out of the question for them because they're not doing that well.

A CEO of a mid- and small-sized company in his 60s says he doesn’t want to hear about pay rises anymore.

“I can feel that my employees are emotionally agitated over the issue. No matter how I try to cultivate new talent, they all try to move on,” he said. “But it’s not easy for us to decide to improve the compensation system at the time.

“I seriously don’t know what to do.”

Asked what starting salary they were looking for, 1,036 job seekers surveyed by job search website Incruite replied 43.63 million won on average. When the same survey was carried out in 2019, the average was 34.56 million won.

The average starting salary at mid- and small-sized companies is only 27.93 million won, according to JobKorea. The job portal collected data on starting salaries at 520 companies in Korea.

The gap between the different types of companies is only growing. In some cases, employees of big companies make almost double their counterparts at small companies.

“More young people have become reluctant to get a job at mid- and small-sized companies these days,” said a 28-year-old employee of a small company. “Many of my friends and acquaintances have quit their jobs [at smaller companies] to look for jobs at big companies or public institutions.”