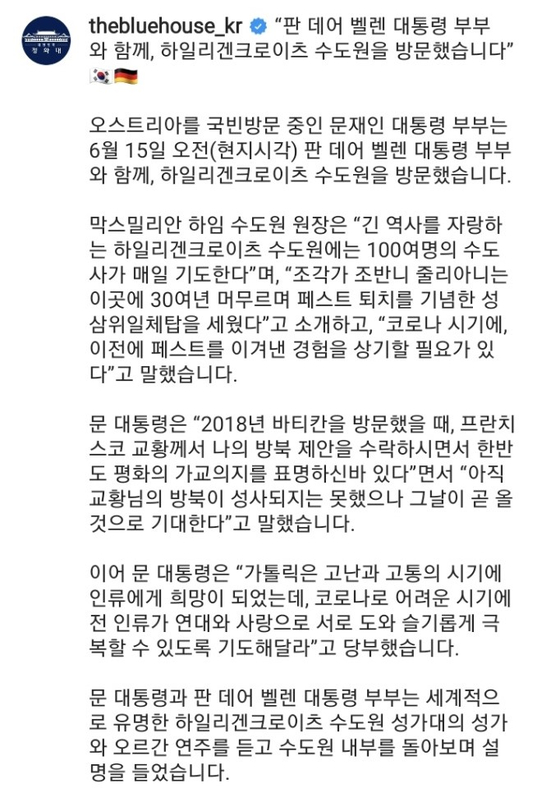 Instagram posting by the Blue House talking about President Moon Jae-in's state visit in Austria shows the flag of Germany on Tuesday. The mistake has since been corrected. [SCREEN CAPTURE]


The Blue House acknowledged its recent blunders in social media postings about the presidential trips to Britain and Austria.

In its Instagram posting on President Moon Jae-in’s visit to Austria on Tuesday, the Blue House used emojis for the flags of Korea and Austria — except, the flag emoji intended for Austria was, in fact, the flag of Germany.

“Together with President Van der Bellen and the first lady, we visited the Heiligenkreuz Abbey,” reads the Instagram message posted by the Blue House on Instagram on Tuesday local time in Austria, describing the visit to the abbey that was part of the final schedule of the presidential visit to Austria that took place from Monday to Tuesday.

But the blunder didn’t go unnoticed.

“Why is there a German flag?” wrote one user in a comment on the posting. “The Austrian government will not be happy if they find out.”

“We’re talking about the official [Instagram] account of the Blue House here, shouldn’t it at least get the flags of countries right?” wrote another user.

A Blue House official told the JoongAng Ilbo that the mistake “appears to have been made by an official who was on late-night duty.”

This isn’t the first mistake the government made during recent presidential trips.

In a Facebook posting on Sunday about the Group of 7 (G7) summit in Britain, which Moon took part in from Friday to Sunday, the Korean government included a group photo of the leaders of G7 and guest nations.

“They cropped out the leader of another nation so that [Moon] would look like he was nearer to the center of the photo,” a user wrote in response to the posting on Monday. 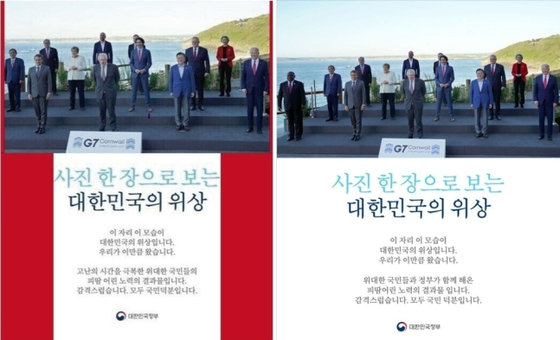 The photos of the Group of 7 summit posted by the Korean government's official Facebook account. The left one shows the photo that was posted on Sunday, with the president of South Africa cropped out. The photo has been replaced since with the one on the right. [YONHAP]


By Monday afternoon, the Blue House had replaced the cropped-out version with the original photo, with President Ramaphosa included.

The Ministry of Culture, Sports and Tourism, which manages the government account on Facebook, told the JoongAng Ilbo it was a “mistake by an official” and that it is considering disciplinary measures against the official.

Last month, a video clip introducing the venue of the 2021 P4G Seoul Summit, which was joined by leaders of some 50 nations, screened at its opening ceremony showed a map of Pyongyang instead of Seoul, raising controversy. The Ministry of Foreign Affairs apologized, stating the mistake was made by a video producer.