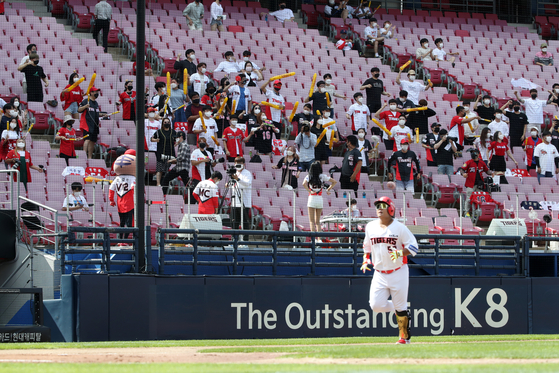 Spectators are cheering for the KBO professional baseball game between SSG Landers and KIA Tigers at Gwangju-Kia Champions Field on Wednesday. Outdoor sports venues under Level 2 in the greater Seoul area, Daegu and Jeju are allowed to fill 30 percent of their seating capacity. The attendance cap for such facilities under Level 1.5 will be expanded to 50 percent. The government will announce this Sunday the new four-tier social distancing scheme set to be implemented next month. [YONHAP]


Returning to normalcy is something that everyone has been longing for during the Covid-19 pandemic.

While the government hinted at easing the curfews of restaurants and bars to midnight and bigger private gatherings from July, some young employees in Korea are fearing the return of hoesik, or after-work dinners often featuring alcohol forced by their boss.

Under the current social distancing measures in Korea, restaurants, cafes, singing rooms and bars in greater Seoul must close by 10 p.m., and private gatherings of more than four people are banned — leading to the declining occasions of company dinners and drinking sessions.

However, health authorities have now announced they will revise the social distancing scheme from July, after the first round of vaccinations for the high-risk elderly wrap up on June 19.

Although the details have yet to be confirmed and will be officially announced this Sunday, employees in Korea — particularly the so-called MZ generation, or millennials and Gen Z, are already worrying about the nightmare called hoesik.

“Hoesik appointments are being scheduled in July, but I hope I’ll be able to go home at 10 p.m. as I do now,” a female marketing employee in her 30s recently wrote on her work group chat, which her boss is also in.

“It was good not to have long hoesik with the excuse of the social distancing measures, as everyone has to go home at 10 p.m.,” the employee said in a phone interview with the JoongAng Ilbo. “I hope hoesik won’t last until late at night even after the current distancing guidelines disappear.”

Other employees agreed that they wish the hoesik culture, which often last until second and third rounds at bars and singing rooms, would be abolished after the pandemic.

“I lost many things due to Covid-19, but the one good thing was that hoesik ends at 10 p.m. straight,” Ms. Kim, an employee in her 20s who started her job two years ago, said.

“It’s only 11 p.m. when I arrive home even after returning from hoesik, so I have time to rest and I’m no longer tired the next day,” Kim said. “Everyone says this [culture] must be maintained."

Ms. Lee, a 31-year-old employee who works at an IT company, said, “I became more familiar with buses since I could get home before they stopped operating.”

“I hope that drinking ending before 10 p.m. can spread as a new trend among office workers,” Lee added.

Some bosses were shocked by the lukewarm response of younger employees, as the news of extended business hours for restaurants and bars were more welcomed among them.

“We haven't been able to gather much with employees for a while due to the overlapping business restrictions and the ban on private gatherings of more than four people,” said Mr. Kim, who owns a small company with around 30 employees in Gyeonggi.

“10 p.m. is too early to part ways. We can pick up where we left off, so I hope the time will be extended a bit more,” Kim added.

A manager of a company in his 50s said, “I always felt sorry to my junior colleagues for not preparing a hoesik session for them for more than a year. Now I’m confused because they’re saying that they prefer shorter hoesik.”

He added he’s worried to seem like a kkondae — a Korean term referring to stubborn or condescending, mostly older, people.

Experts predict that the voices of the MZ generation could lead to changes in the organizational culture in Korea.

"Wondering how to harmonize the workplace culture from how it changed after Covid-19 to how it was before, such as flexible working and telecommuting, is a universal phenomenon," Lee Eun-hyung, a professor of Business Administration at Kookmin University and author of "How to Work with Millennials" (2019) said.

“We need a new workplace culture that reflects the advantages and disadvantages of each. The opinions of the younger generation should be highly reflected, so that psychological resistance won’t be high."