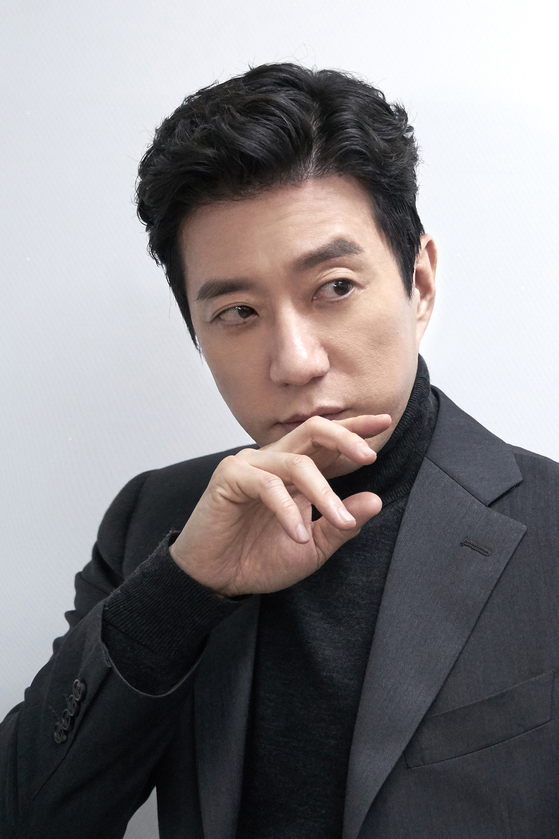 Actor Kim Myung-min and director Kim Sok-yun have worked together for years, making a number of big-screen comedies starting with “Detective K” series in 2011. Their most recent collaboration was on a small-screen legal-mystery drama set on a campus. “Law School,” which ran on JTBC, ended early this month.

In the series, Kim masterfully portrayed a criminal law professor named Yang Jong-hun, who is very charismatic and may have reminded the audience of another charismatic character -- Kang Mae of MBC drama “Beethoven Virus (2008) -- that Kim played 13 years ago.

“I was curious about how we would do together in a TV drama,” said Kim in an interview with Ilgan Sports, an affiliate of the Korea JoongAng Daily, adding that he shared many ideas with the director when he was doing the series in order to find ways to improve the flow of the story.

“It was as good as I expected, although we had to focus more on what each is tasked to do because of the pandemic and couldn’t talk with each other as much.”

The story evolves on a law school campus at one of the most prestigious institutions in Korea. Through fierce competition, the legal experts in training get to understand what justice is and how to practice law.

“I think the drama tries to reflect much of the issues that were hot in the real world, so I got to experience a lot of things vicariously,” said Kim. “I think I will be reminded of the drama whenever similar issues we dealt with come up later on.”

Q. What message did you want to deliver through this drama?


A. As I was playing a role of a legal expert, I felt my heart pumping so many times. Even though the drama is a mystery-thriller, it was about law school students competitively trying to make something happen.


I really don’t like doing the same thing over and over again, but from the moment I saw the script of the “Law School,” I thought the character is very similar to the one I played before. So I asked, and I got the answer that it was intentional. The director said many miss the past version of myself in “Beethoven Virus,” and he wanted to show that me to the generation that didn’t get to see it then. But I couldn’t really play the character in the exact same way. I tried to revive some of the things I did for Kang Mae of “Beethoven Virus,” but I also tried to stay away from it at least a little bit. I tried my best to stick to what’s written in the script, and so I exhibited many of the characteristics Kang had in the previous drama. I think in the beginning of the drama, my professor character was a lot like Kang, but towards the end of it, it had developed its own style.

What was the most charming thing you found from the character you played this time?


He was rather firm when it comes to teaching, because he didn’t want his students to spend time confused asking themselves whether the law is really fair. I think I wanted my character to be a malicious one in a way to strongly show that the law has to be fair and the legal experts should be the ones who continue to prove that. My character always had a warm heart inside thinking and worrying about his students. When I get to show that side a bit throughout the drama as it unfolds, I thought that’s such an attractive point my character has.

Did you sympathize a lot with your character?

Maybe it is because I lived the life of Yang in the drama, I found the character so lovely. There’s nothing about him that I hate. I think any student would be lucky if they get to have a professor like Yang. Although the drama didn’t show too much about his private self, I think Yang spends much time agonizing when he’s at home. He must be very lonely as he fights to keep the values he respects and tries to find legal clauses that could punish [wrong].

What was most difficult in working on this drama?


It took about 10 times more time to memorize the lines written in just one page compared to any other script I worked with. If I got distracted for just a second, I would forget the lines. Legal terms didn’t become mine until I really understood what they meant. I always looked through a dictionary. When even a dictionary didn’t give me a clear understanding of certain words, then I read some of the related cases to understand what the words mean. I have to truly understand what all the lines I ought to say in order to really make my acting real and genuine.


How did you like one-take filming, a signature style of the director?


If you continue doing the same scene over and over again, you lose your focus and fall into the trap of mannerism. I don’t like it. You might not be as smooth with the lines you say in the very first take, and you might not be acting the way you intended to, but the emotional flow that comes out only in the first take I think is important. I agree with his style of just getting things done in just one take, maybe more so, because I used to do theater in school.

What’s your plan for the rest of the year?


I was going to decide on which work I come back with as soon as possible, but the director told me that I was in such a haste. So I came to think that instead of trying to have a change of a character too soon, it might be better to take some time and try something else later. I will try to stay cool over the summer and think more about what work I will want to do next.